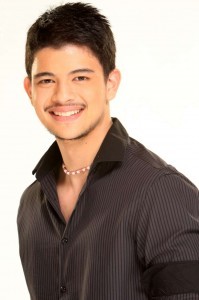 Rayver Cruz only has good words when asked about Derek Ramsay, who is now in a relationship with his former girlfriend, actress Cristine Reyes.

Cruz, who is co-starring with Reyes in “Bukas Na Lang Kita Mamahalin,” was asked to comment on the romantic ties of the actress with Ramsay shortly after a press conference held Wednesday for the ABS-CBN drama series.

Ramsay, in a separate interview, confirmed that he and Reyes officially became a couple on August 28, the day the media gathering for the soap.

On whether he is “hurt” to learn of the couple’s relationship, Cruz said, “If ever man mag-end up sila together, ba’t naman hindi? Derek is a decent guy, mabait siyang tao, alam kong maaalagaan niya si AA (Reyes). Syempre napaka-mature niyang tao.”

The 24-year-old actor related that his and Reyes’ friendship with Ramsay goes a long way, in explaining why he has no qualms about the new relationship.

Reyes and Ramsay started to become friends when they co-starred in the 2011 romance-drama film “No Other Woman.” At the time, Cruz noted, he never felt jealous about his former girlfriend’s closeness to the actor.

Ramsay and Panganiban broke up in February 2012, according to the actress. Reyes and Cruz, on the other hand, confirmed their separation in a televised announcement in January.

Since their break-up, which took place in late 2012, Cruz said he and Reyes have maintained a close relationship. Pointing to their amicable separation, the actor added he is happy to be working with Reyes without any awkwardness.

At the time they confirmed their break-up side by side, as aired on the entertainment talk show “The Buzz,” Cruz said they came to the decision so Reyes wouldn’t be “judged unfairly” when she is seen with other men in public.

On Wednesday, the actor maintained there was never any third party in their relationship, “kasi kung may third party, I’m sure hindi kami ganito. Hindi kami magpapansinan, mag-iilangan kami.”

As for his the current state of his “love life,” Cruz admitted he went out twice with Binibining Pilipinas 2013 finalist Imee Hart, but added it never developed into a serious relationship.

Asked whether he is now “dating” anyone else, Cruz brought up the “blessing” that is his active career—being a mainstay on the concert variety program “ASAP,” and one of the lead stars in “Bukas Na Lang Kita Mamahalin.”

Jennylyn Mercado expresses gratitude to GMA for allowing her to finish ‘Love, Die, Repeat’ next year