WASHINGTON, December 21, 2010 (AFP) – Skygazers with a clear view in North America and Europe were greeted with a celestial treat in the early morning hours Tuesday, as a unique total lunar eclipse transformed the Moon pink, coppery or even a blood red.

Coinciding eerily with the northern hemisphereâ€™s mid-winter solstice – for the first time in almost four centuries – the eclipse showed the Sun, the Earth and its satellite as they directly aligned, with the Moon swinging into the cone of shadow cast by its mother planet.

Despite being in shadow, the Moon did not become invisible, as there was still residual light deflected towards it by our atmosphere. 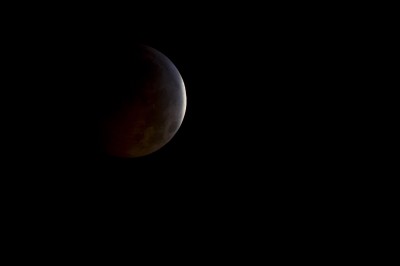 Most of this refracted light is in the red part of the spectrum and as a result the Moon, seen from Earth, turned a reddish, coppery or orange hue, sometimes even brownish.

The eclipse was running for three and a half hours, starting with a chunk being slowly eaten out at 0633 GMT and the stage of total eclipse – when the Moon heads into the “umbra” cast by the Earth – lasting from 0741 to 0853 GMT. It was to last until 1001 GMT.

Viewers in the United States took to social networking sights to express their delight – or disappointment – at the phenomenon.

“Just got up to see the eclipse, and itâ€™s unbelievable. Iâ€™ve been saying ‘Oh, wow’ over & over,” wrote Shonali Burke on the micro-blogging site from Washington.

Others in the southern and western United States lamented cloud cover blocking their view.

Sarcastically thanking the overcast Los Angeles “for blocking the first lunar eclipse on the Winter Solstice in 372 years,” Twitter user Cory Parker added: “Guess I’ll just catch the next one…”

Hundreds of Internet users also uploaded their own photos of the darkened, color-tinged moon, to go with NASA’s and other space website moon close-ups.

NASAâ€™s veteran eclipse expert Fred Espenak explained that while the entire event was to be visible from North America, Greenland and Iceland, western Europe saw the beginning stages before moonset and western Asia got the later stages after moonrise.

“The first is simply how deeply the Moon goes into the umbra. The center of the umbra is much darker than its edges,” it says.

“The other factor is the state of Earth’s atmosphere along the sunrise-sunset line. If the air is very clear, the eclipse is bright. But if a major volcanic eruption has polluted the stratosphere with thin haze, the eclipse will be dark red, ashen gray, or blood-black.”

Lunar eclipses have long been associated with superstitions and signs of ill omen, especially in battle.

The defeat of the Persian king Darius III by Alexander the Great in the Battle of Gaugamela in 331 BC was foretold by soothsayers when the Moon turned blood-red a few days earlier.

And an eclipse is credited with saving the life of Christopher Columbus and his crew when they were stranded without supplies on the coast of Jamaica.

According to legend, Columbus, looking at an astronomical almanac compiled by a German mathematician, realized that a total eclipse of the Moon would occur on February 29, 1504.

He called the native leaders and warned them if they did not help, he would make the Moon disappear the following night.

The warning, of course, came true, prompting the terrified people to beg Columbus to restore the Moon – which he did, in return for as much food as his men needed. He and the crew were rescued on June 29, 1504.

The last total lunar eclipse took place on February 21 2008. Next year, says Espenak, will see two: on June 15 and December 10.

A solar eclipse happens when the Moon swings between the Earth and the Sun.