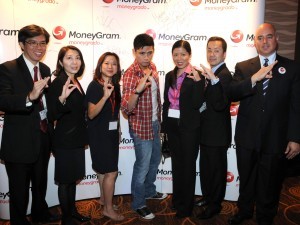 Visiting MoneyGram Philippine Country Alex Lim says Robin Padilla is very popular in the Philippines and among the millions of overseas Filipino Workers or OFWs whose hard-earned dollars have been a big contributor to the local economy. Photo: Rhony Laigo/Weekend Balita

(Weekend Balita) – For one of the top remitting agencies in the world, MoneyGram International didn’t seem to need introduction, much less a celebrity promoting the top financial institution. But it did so as far as the Philippines is concerned.

Maybe it has something to do with our culture, that is, the Filipino way of identifying himself or herself with a person who has a mass appeal and regarded as “one of them.” Kaisa ika nga, or kakampi natin siya. Filipinos are known to be clannish, if not parochial.

“This was the first time that MoneyGram got a celebrity endorser,” said Alex Chan Lim, the top Filipino MoneyGram executive who came to the U.S. to “promote” their new ad campaign featuring Robin Padilla to Filipinos all over the world. The Philippine Country Manager said Robin will help MoneyGram reach more overseas Filipino workers (OFWs) and be familiarized and be aware of the products and services that MoneyGram offers.

Not that MoneyGram is struggling in the Philippines. In fact, it is one of the largest remitting firms in the country with 9,500 locations scattered all over the Philippines “from Batanes to Tawi-tawi,” Lim said. He added that MoneyGram’s vast international network gives OFWs and their loved ones more access, security, the ease and convenience as well as savings if they use MoneyGram to send their hard-earned dollars.

The choice for Robin was not a difficult one, Lim said. The popularity of the actor spans all over the globe because “he’s been around and he’s always there constantly.” Lim said despite Robin’s “bad boy” image before, he’s transformation to become a responsible actor after spending some time in prison “makes him a perfect example of reformed man who’s been given a second chance.”

Lim said getting a second chance has a parallelism to many OFWs who have chosen to leave their families and toil in a foreign land. He explained that Filipinos feel that working abroad is like a one-time privilege, a second life so to speak, to be good and for them to provide for their families. As such “even for those who have transgressed in the past while living in the Philippines” they become responsible workers abroad.

There were other recommendations, Lim said, “but nobody came close. Robin’s popularity is constant.” Lim also said that Robin didn’t want to endorse any product that he didn’t believe in. And since Robin is a practicing Muslim, “It was a bonus,” Lim said, as OFWs who work in the Middle East  – more than a million strong in Saudi Arabia alone – are one of the main sources of revenues for MoneyGram.

For the record, Lim said Filipino-Americans remain as the number one market for MoneyGram  – more than half of its total revenue for the Philippine segment. Interestingly, the Philippines is the fourth largest recipient country of money transfers after India, China and Mexico with over $21 billion sent by OFWs annually, which is almost half of what both Indians and Chinese (more than $50 billion each) send to their respective countries.

In the Philippines, Lim said MoneyGram has tie-ups with the 20 biggest banks in the country, foremost of which are the BDO (Banco de Oro), Metrobank, RCBC and Allied Bank. He said MoneyGram users can remit their money and have their loved ones receive it on the same day if they have an account with BDO. The 19 other banks can receive it on the next business day. MoneyGram has been in the Philippines for about 10 years.

Apart from the banks, other MoneyGram outlets in the Philippines include pawnshops and travel agencies to serve even the far-flung areas of the archipelago of more than 7,100 islands.

In spite of MoneyGram’s solid network in the Philippines, the task for Lim, who is an engineer with a PhD in Management, is to strengthen and build more relationships with government agencies that support and manage OFW programs, while maintaining that the 9,500 locations are serving their clients well and expand their market base.

MoneyGram is the second largest money transfer business in the world with over 275,000 agent locations in 194 countries and territories, according to its website. In 2006, MoneyGram passed the $1 billion mark in revenues. Last year, it grossed $1.25 billion.

Jake Cuenca shares how he relates to ‘Viral Scandal’