Regine revs up for series featuring songs from musicals 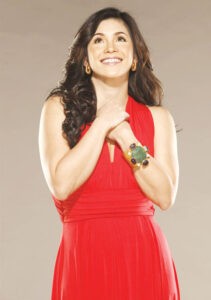 She’s iconic for her wide vocal range, hit songs and movies, as well as sold-out concerts, but Regine Velasquez-Alcasid’s next ace up her sleeve is something that’s been overlooked for awhile.

Only her most avid fans would probably recall Regine’s appearance in “Kenkoy Loves Rosing” where she played the titular character to Janno Gibbs’ Kenkoy. She also played Maria Clara in Ryan Cayabyab’s musical adaptation of José Rizal’s “Noli Me Tangere” in 1995. It has been a long time since then but she will soon revisit this facet of her artistry via “Regine At The Theater.”

In “Regine At The Theater,” expect the diva to take on songs from the likes of “Katy,” “Rak of Aegis” and others both popular and obscure she’s never sung live. Asked if she is going to re-imagine these songs, Regine explained, “Ayoko masyadong baguhin na para namang mababago ’yung kanta… a lot of them will be arranged in the same way kung paano nakilala ng mga tao ’yung mga kanta.”

The concert series will run Nov. 6, 7, 20 and 21 at the Solaire Resort and Casino. It is sponsored by PLDT Home, which has put out the limited edition Regine landline phone series featuring classic and corded models. PLDT Landline subscribers who will upgrade to one of The Regine Series Telset from Oct. 1 up to Nov. 9 will be given free concert tickets.

The fans have been clamoring to see their idol on the silver screen once more. Recall that some of her hit movies are “Kailangan Ko’y Ikaw,” “Wanted: Perfect Mother” and “Pangarap Ko Ang Ibigin Ka.”

Still, she isn’t completely closing the doors on the idea. “I will wait for a good project to come. Something that I am going to be comfortable, a project that won’t naman, ’yung hindi ko kailangang i-sacrifice ang madaming pains para sa isang proyekto.” (MNS)