It might be the potlucks, it might be those long hours sitting in pews, but whatever the cause, a new study presented this week shows a link between religious activity and weight gain.

The study, conducted by researchers at Northwestern University, found that young adults who frequently attended religious activities were far more likely to become obese than those who didn’t. 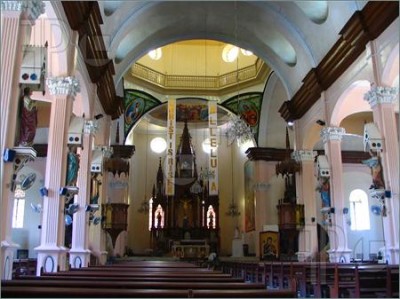 “And that is true even after we adjusted for variables like age, race, gender, education, income, and baseline body mass index,” he added.

The study, presented at a meeting of the American Heart Association, followed 2,433 men and women starting between the ages of 20 and 32 for 18 years. Study subjects were all of normal weight at the beginning of the study. By the end, however, those who had attended a religious function at least once a week were more likely to be obese, posting a body mass index of 30 or higher. Previous research by Northwestern Medicine has found a correlation between religious involvement and obesity in middle age and older adults.

Are church attendees praising the lard along with the Lord?

“We didn’t look specifically at the potluck factor, but anecdotally, we know that oftentimes at these religious gatherings people will eat traditional comfort foods which are often high in fat and calories and salt,â€ says Feinstein. “But, again, thatâ€™s not something we looked at in this particular study.”

â€œYou donâ€™t see a lot of fresh stuff at most church potlucks,â€ she says. â€œYouâ€™ll see spaghetti and Swedish meatballs and three or four varieties of potato casserole or green bean casserole or Jell-O salads. Plus heaps and piles of desserts â€” lots of pies and cakes and cookies.â€

Not all churches worship at the altar of sugar and salt, though.

Byron Krystad, director of operations at the University Unitarian Church in nearby Seattle, says sweets aren’t often on the menu.

â€œPeople here are very much on the bandwagon with regard to organic foods and removing sugars and fats from their diet,â€ he says. â€œWe get all sorts of feedback about what kind of snacks to have on Sunday morning during coffee hour. If somebody dares to bring out a cake, thereâ€™s an uproar about it.â€

Feinstein says while obesity appears to be an issue for religious people, previous studies have shown that the faithful tend to live longer, be less likely to smoke, and to have better mental health status.