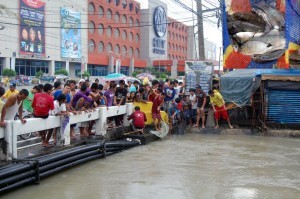 Residents catch tilapia at Panapaan Bridge, Barangay Habay I in Bacoor, Cavite on Thursday (August 22, 2013) as heavy flooding persists in Metro Manila and nearby provinces due to the enhanced southwest monsoon. (MNS photo)

MANILA  (Mabuhay) – It may take at least weeks before repairs can be completed on a part of the Subic Clark Tarlac Expressway (SCTEx) that was damaged Tuesday afternoon amid heavy rain and floods.

Project manager Engineer Joshua Bingcang also said Wednesday they are waiting for the weather to improve before they can fully assess the damage to the structure.

“Gusto namin ilang weeks sana,” Bingcang said in an interview on dzBB radio, when asked how long the repairs would take.

On Tuesday afternoon, the approach to a bridge spanning the SCTEX collapsed, prompting authorities to close the affected part to traffic.

Bus firms were forced to take alternate routes due to the incident.

Citing initial information, Bingcang said a part of the bridge got saturated and eroded.

However, he said the bridge’s structural integrity did not appear to be compromised, though he said they may conduct a structural review.

In the meantime, he said vehicles heading for Subic may have to take alternate routes.

However, he said those going to Baguio should not expect problems. (MNS)