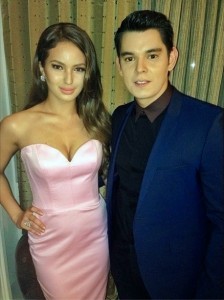 Although settling down is definitely in the horizon, celebrity couple Richard Gutierrez and Sarah Lahbati are not in a rush, especially since they have just been blessed with a son.

Gutierrez, however, admitted that he and Lahbati are now living together in his house, where his sister Ruffa also lives.

Asked if he thinks Lahbati is already “the one,” Gutierrez said, “Of course. I won’t be spending my time with her if I feel like she’s not the right person. It’s in the horizon but for now, it’s important also na kakabalik lang niya sa work niya and we are doing a reality show and we are enjoying our time having baby Zion. Doon muna kami naka-focus as of now. Everything will fall into place.”

Despite being criticized for keeping Zion a secret for over a year, Gutierrez maintained that he has always been a proud father and will do everything to protect Lahbati and their son.

After everything they have been through, the 30-year-old actor believes what he and Lahbati now have is “unbreakable.”

Asked for a message for Zion in cases he gets to watch his father’s interview in the future, Gutierrez said, “I want to tell him that I love him. I’m proud of him. I will protect him no matter what. I just want him to be a good kid and respect others.” (MNS)

Zanjoe, Bea living under one roof?