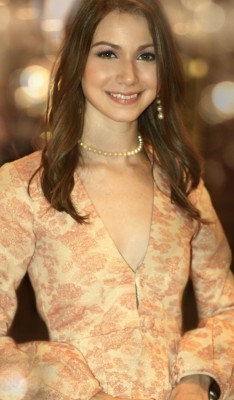 Although she initially planned to just go for a hosting job, Ostwani said she grabbed the opportunity to become an actress when the TV program was offered to her by ABS-CBN.

“It was really a leap of faith because it was something na I thought hindi ko po kaya. ItÃ­s not easy, mahirap po siya. It needs a lot of strength, confidence talagang kinakabahan [ako],” she said.

She underwent a series of workshops along with other “Kapitan Inggo” cast as part of her preparation.

The newbie actress, whose father is a Syrian and mother a Spanish-German, said she is also working on improving her Tagalog.

“But I promise to give my best. I hope na susuportahan ninyo po ako,” she said.

When asked if she is prepared to face any intrigue and controversy, Rima answered in the affirmative, saying she is willing to make adjustments and that she just “really has to be strong.”

She also said she is going to work hard so that in time she will be known because of her talents and not just because she used to go out with Ocampo. (MNS)

Kathryn pressured, excited to do new movie with Daniel