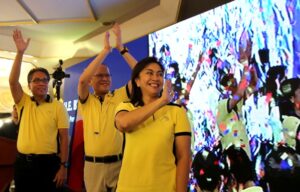 MANILA (Mabuhay) – Vice-presidential candidate Leni Robredo said Thursday that she is content being Mar Roxas’ running mate in the 2016 elections, even if she was not the first choice.

Robredo said she is honored that she was even considered by the Liberal Party (LP) as its vice presidential bet despite her initial reluctance to run.

“It’s still a privilege and honor to be considered for this post. All those who have been considered have been preparing for a national post for a very long time. Ako lang yata ‘yung walang ganoong preparation,” the Camarines Sur representative said.

“I always believe in fate, that everything will fall into place eventually if it is meant to be. It doesn’t really matter if I was the second choice or the last choice. ‘Yung pakiramdam na we have obligations bigger than ourselves, hindi mo na maiisip kung pang-ilang choice ka.”

Robredo also admitted that she would have to double her efforts to boost her standing in pre-election surveys, opposite other more popular vice presidential bets.

“I am fully aware of the fact na out of all the contenders, ako ‘yung pinaka-hindi kilala. I haven’t gone through any national elections yet, kahit ‘yung asawa ko. Wala akong resources, wala akong anything kaya siguro dodoblehin ‘yung sipag,” Robredo said.

“I realize that I have to introduce myself to the entire country, marami pang hindi nakakakilala sa akin.”

Despite being at a disadvantage, Robredo is confident that she can set herself apart from rivals with her long years of service in the local government.

Robredo also assured that Camarines Sur will not slide back to patronage politics as she leaves her current post, reasoning that change in the mindset of her constituents have opened doors for reformist politicians.(MNS)