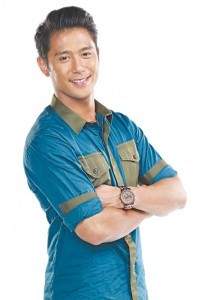 GMA Artist Center (GMAAC) talent Rocco Nacino feels so blessed this 2013 and for good reasons, most of all for his various TV programs and movies, making him one of the busiest actors today.

Rocco is, of course, currently portraying the role of Jerry on “Akin Pa Rin Ang Bukas” which topbills Lovi Poe.

Aside from the primetime series, Rocco ventures into hosting as he joins GMA News reporter and anchor Mariz Umali on “Out Of Control,” which started airing last Nov. 23. The show tackles binge eating and social phobia, and airs every Saturday afternoon.

The Kapuso heartthrob will also be visible on the silver screen as he stars in the 2013 Metro Manila Film Festival (MMFF) entry “Pedro Calungsod: Batang Martir.”

In a recent interview with the versatile actor, he admits that 2013 has been a good year for him. “Kahit nakakapagod at nakaka-drain, I feel motivated. I’m excited and blessed to have several projects. I get good and significant roles so hindi ko dapat pabayaan ang mga opportunities na ito. Kaya I’m thankful ngayong 2013 for all the blessings that I’ve been receiving,” Rocco shares.