ORLANDO, Fla. (AP) – Aaron Rodgers’ smile never faded as he rode on the back of a convertible pacing down a confetti-filled parade route through Disney World’s Magic Kingdom on Monday afternoon.

The Super Bowl MVP was operating on only a few hours’ sleep following Green Bay’s 31-25 win over Pittsburgh Sunday. But even with a Florida afternoon storm threatening in the distance, it was clear nothing could cloud the Packers quarterback’s spirit. 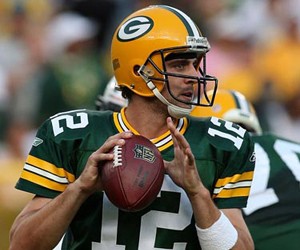 “It’s a special day, it really is,” Rodgers said afterward. “I didn’t get a lot of sleep (Sunday) night, but it’s great to be able to celebrate. This is a team that came together and accomplished something special.”

Rodgers became the latest Super Bowl MVP to participate in Disney’s “I’m going to Disney World” commercial series Sunday night, which celebrated its 25th anniversary this year. Former New York Giants Phil Simms was the first to do it following the 1987 Super Bowl. Rodgers flew to Orlando from Texas on Monday.

A California native, Rodgers said he had been to Disneyland in Anaheim, but never to Orlando’s Disney World. Thousands of fans lined Main Street in the theme park Monday, many of them decked out in Packers’ jerseys, T-shirts and cheesehead hats.

Rodgers posed for photos with the Disney characters and even took a bite of a specially-made block of cheese in the shape of a Packers emblem.

Rodgers said that even with the victory, he doesn’t expect the comparisons to former Green Bay quarterback Brett Favre to end. Favre led the Packers to their previous Super Bowl win in 1997, but unlike Rodgers, was not the game’s MVP.

“I don’t think they ever stop because I’m the guy that followed him,” Rodgers said. “But I hope. You know, we’re doing something special in Green Bay right now and I hope people can recognize that. I’m proud of the way our team came together this season.

“Thankfully, I have two parents that raised me the right way and pushed me to be the best at whatever I did. And I wanted to be a football player. So, right now I’m at the top of my game.”

Longtime Packers fan Mike Gottlieb has lived in Orlando for the past 25 years, but is originally for Milwaukee.

One of the founders of the Central Florida Packer Backers, a fan club that started in 1987, he 52-year-old Gottlieb and the group had about 100 of its members at Disney on Monday to see Rodgers. Also one of the publicly-owned Packers part-owners, Gottlieb said he thinks the ghost of Favre no longer hangs over Rodgers.

Rodgers passed for 304 yards and three touchdowns in his first Super Bowl appearance.

He said was still thinking about his underwhelming effort in Green Bay’s 21-14 NFC championship game win over Chicago. He threw two interceptions and no touchdowns in that game, though he did have a 1-yard touchdown run.

“I’m a perfectionist,” Rodgers said. “If I played a little better I think I’d be a little more satisfied with my postseason, but I prepared to play well (Sunday) and I was able to meet those expectations.”

Next up for Rodgers is to rejoin his teammates for a celebration at Green Bay’s Lambeau Field on Tuesday. But he said it’s the moments with them Sunday night after the game that are continuing to play in his mind.

“Just in the locker room after the game and being able to reflect with my teammates,” he said. “Big hugs. It’s a special group of men. I think you realize at that point the season is over and that group of men is never gonna be together again. It’s just special to be able to share with those guys because we went through a lot together this year.”

After he was done at Disney, Rodgers flew to New York city and appeared on CBS’s “Late Show with David Letterman,” where he chatted with the host about his days at junior college and tossed the comedian a pass.

Left hooks will bring Margarito down in 6th or 7th – Golez