Roxas-Cayetano tandem ‘out of the picture’: Drilon 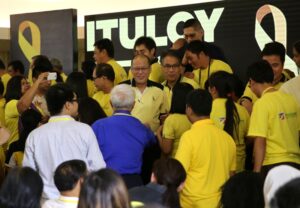 MANILA, Oct 1 (Mabuhay) – Senate President Franklin Drilon ruled out on Thursday the possibility of a Roxas-Cayetano tandem in the 2016 elections.

(For now, Senator Alan seems to want – should he decide to run – Digong Duterte, Davao [City] mayor as his running mate. So I think “Roxas-Cayetano” is already out of the picture.)

He was referring to Davao City Mayor Rodrigo Duterte, who has repeatedly said that he would not join the 2016 presidential race.

Drilon earlier said that Camarines Sur Representative Leni Robredo was already their candidate for vice president but the latter said she has yet to decide on it.

Asked if the party had a plan B should they fail to convince Robredo, the Senate leader said: “Wala kaming plan B.”

Asked if they were already sure about Robredo, the Senate leader said, talks are still ongoing. (MNS)