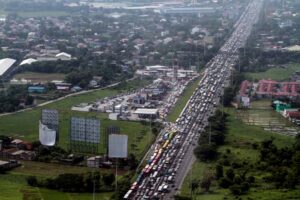 MANILA, Aug 29 (Mabuhay) — After meeting with local executives and top police officials, Interior Secretary Manuel “Mar” Roxas II appealed to protesters from the influential Iglesia ni Cristo (INC) not to block the main roads in Metro Manila as they continue their vigil.

The meeting came after the Mandaluyong City government allowed the religious organization to hold a protest on Edsa-Shaw Boulevard until August 30, Sunday.

In a press briefing at Camp Crame, Roxas said the purpose of the meeting was to discuss how to ensure the general welfare and safety of the people, including the INC members, amid the demonstration being held by disgruntled INC followers along Edsa.

(We held a meeting to discuss everyone’s safety especially the flow of traffic and the public’s safety including the members of the INC while they stage their activity. Others might take advantage of the situation.)

On Friday, thousands of commuters and motorists got stuck in heavy traffic due to the protest, occasional rain and the frenzy over weekend sales.

Noting that there are 17 million residents in Metro Manila, Roxas said they discussed ways to address the traffic that had caused inconvenience to motorists especially those who passed through Edsa.

(We will request them to keep the main arteries open so the public can pass through the roads and reach their homes and destinations safely.)

Roxas also likened the blocking of major road arteries in the metropolis to a person suffering “heart attack or stroke.”

(We need to keep the roads passable. Likening it to a person, if there’s a blockage, it may lead to heart attack or stroke.)

Traffic in Edsa was paralyzed after almost 5,000 INC members gathered there on Friday after holding a “vigil” in front of the Department of Justice office in Ermita, Manila. The members are protesting against Justice Secretary Leila de Lima for allegedly giving “special treatment” to the ousted ministers of INC.

The secretary, who earlier reminded the protesters, while they are exercising their right to be heard, should not to impinge the rights of other people, also admitted that handling the mass action was a “difficult task.”

(This is a difficult task, but we believe that all the parties, including the INC members, want peace and order, and we are doing our job in a calm and proper money to keep the general welfare of those living in Metro Manila.) (MNS)