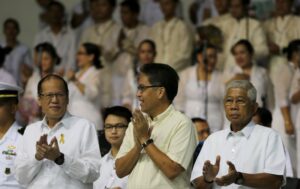 CEBU CITY (Mabuhay) – Interior Secretary Manuel “Mar” Roxas II on Monday issued a warning against  “traditional politicians” who are wooing voters in campaigns but will “take advantage” of the people once they get elected.

“Siga sila at maaari silang magpatuloy ng pananamantala sa inyo. Iyan ang trapo (traditional politician) style ng pamamahala (They are tough and they will continue to take advantage of you. This is the trapo style of governance),” he said in a speech at the  “Daang Matuwid People’s Dialogue” at Cebu Normal University here in Cebu City on Monday morning.

Coincidentally, Vice President Jejomar Binay, who will run against Roxas in the presidential elections in 2016, and Senator Grace Poe, Roxas’ prospective running mate, are in Cebu for separate speaking engagements.

Roxas also criticized “traveling” politicians who have been going around the country to promote themselves but do not have clear plans to improve the condition of the people.

(There are others who lead but don’t have plans, no direction and no means to reach what they want for the country. In short, they just want to coast along. With us in Daang Matuwid [straight path], the direction is clear.)

Roxas has been tapped by President Benigno Aquino III to become the standard-bearer of the Liberal Party in next year’s presidential race.

After the dialogue, Roxas and some of the cabinet members will attend yet another “Gathering of Friends” with President Aquino at Cebu Coliseum  at 2 p.m.

In a Malacañang advisory, it said at least 8,000 people composed of various leaders from different political parties, representatives from civil society organizations, local chief executives of Central Visayas and others are expected to attend the event at the coliseum. (MNS)

SLEEP ON IT: Tips to beat the heat