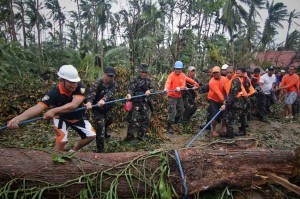 Military personnel and public work employees clear a fallen tree blocking a section of the National Highway in Taft, Eastern Samar on Monday, a day after typhoon Ruby tore through the province. Ruby killed at least 21 people and destroyed thousands of homes on remote islands. (MNS photo)

MANILA, Dec 9 (Mabuhay) — The death toll from a giant storm crossing the Philippines rose to 27 on Tuesday, the Red Cross said, but there was widespread relief after it brushed the capital without causing major damage.

Most of the people killed were on the far eastern island of Samar, where Typhoon Ruby (Hagupit) initially made landfall as a typhoon on the weekend with winds of 210 kilometers (130 miles) an hour.

Ruby then weakened into a tropical storm while moving slowly west, passing close to the capital Manila on Monday night and Tuesday morning without dumping forecast heavy rain. Ruby has since weakened further into a tropical depression.

But data from the National Disaster Coordinating Council showed only three fatalities so far, with eight reported deaths still being verified.

Tens of thousands of people, mostly the city’s poorest residents who live in shanty homes along the coast and riverbanks, spent the night in evacuation centers to wait out the storm.

They returned to their homes on Monday in drizzly weather after only moderate rain and no major flooding throughout the night.

Philippine Red Cross chairman Richard Gordon said Tuesday the number of people confirmed killed so far was 27, although he expected that number to rise with full assessments from Samar and other areas yet to be done.

Ruby was downgraded from a tropical storm to a tropical depression on Tuesday, as it passed over the far western islands of the Southeast Asian archipelago and approached the South China Sea. (MNS)

Only 128 Martial Law victims filed for compensation so far – board