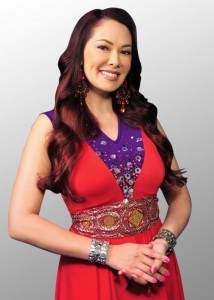 Addressing her rumored return as a Kapamilya, Ruffa Gutierrez said her contract with TV5 is still up for re-negotiation when it expires in March.

The 38-year-old actress-host, who was with ABS-CBN for three years before transferring to the No. 3 network in 2010, said any speculation as to her home network going forward is premature.

“I don’t know yet. My contract is [with TV5] is up soon, so we have to re-negotiate, and everything is still very premature to talk about now. So once I know the plans, I’ll definitely let you know,” she said.

In the meantime, Gutierrez said she is gearing up for a new film project, on top of supporting her mom, talent manager Annabelle Rama, in her campaign leading up to the May mid-term elections.

Rama is running for a seat in Congress under the United Nationalist Alliance (UNA), to represent the first district of Cebu.

“Aside from my mom’s campaign, I’m about to start a new project. I have a movie script that I’m reading. ‘Yun and then there are two other projects that I’m working on. I’m very excited about 2013,” Gutierrez said. (MNS)