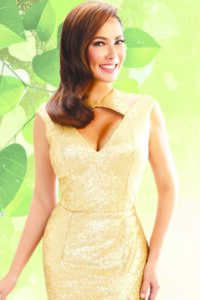 All is well now between Ruffa Gutierrez and her mom Annabelle Rama despite that the latter still seems to have concerns over the former’s non-showbiz boyfriend, Jordan Mouyal.

Apparently, Annabelle got mad upon learning that Ruffa had agreed to do a magazine cover shoot with Jordan without informing her.

Seemingly half in jest, half out of frustration over the situation, Ruffa said at time of interview that she is planning to dare her mom to set her up with someone whom she feels is right for her.

She related how Jordan keeps trying to endear himself to Annabelle, whom Ruffa says remains “dedma.”

The former beauty queen and Jordan celebrated their first year anniversary as a couple last January. She expressed how happy she is to find a person who loves her unconditionally. Still, they are in no rush to tie the knot.

“Kasi what I’m really focused on now is you know, providing for my kids and their future. I’m a single working mom so importante talaga na i-secure ko ang future nila,” said Ruffa.

Having a hectic work schedule, Ruffa is taking advantage of Holy Week by bringing her whole family to Bali, Indonesia.

“The reason I keep on coming back to Bali is it’s very diverse eh. Pwede kang mag-surf, mag-shopping or swimming,” she said.

Ruffa added that they will also be shooting scenes for the last season of “It Take Gutz To Be A Gutierrez” there.

“I think for me we just need to live our lives and let the camera just follow us around. Mahirap naman kasi magplano kung anong mangyayari sa season 3,” she said. (MNS)

Aga, Charlene to celebrate Chistmas in the US