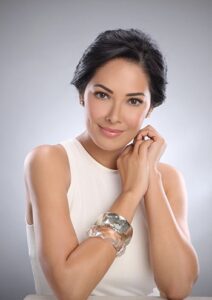 Ruffa Gutierrez is happy and in love again.

In a recent interview, the beauty queen-turned-TV host-actress revealed she is content with her ongoing relationship with French-Israeli businessman Jordan Mouyal.

Ruffa went on to proudly share how Jordan also loves her children.

“Nandiyan siya lagi to help them. Kunwari may French lessons sila, he will teach them. Pinagsasabihan din sila kapag makulit. So nakikita ko naman na he cares about them,” she said.

For those worried about her being heartbroken again, Ruffa said, “Ang tagal ko nang walang asawa and I’m not answerable to anyone.”

If anything, she is leaving it all up to God.

“Talagang whatever God has planned for me, ayoko ng kontrahin kasi usually when I choose laging palpak. So sana naman, God will choose whoever I’ll end up with,” she added.

At this point, all that matters to Ruffa is the happiness of her children. “Importante talaga na my kids will love the person that I’m gonna be with and he will treat my kids also with respect. Not necessarily as his own but just mutual respect, love and understanding,” she stressed.

For now, she’s enjoying every moment she spends with Jordan.

“Steady lang kami. Very happy. Andyan pa rin naman ’yung romance, ang corny naman kung wala, ’di ba? But it’s more on the side that we complement each other and we make each other happy,” Ruffa pointed out.

“Kung may mga arguments man kami, it’s more on the little things lang. Petty. And the fact that we both love to travel, we both are hard working and at the same time, hindi kami parehong seloso na wala sa lugar.”

Lest her fans think she is going to remarry soon, Ruffa made clear, “As of now we’re just enjoying each other’s company and it’s better like that. Let’s keep it light. Marami siyang pangarap na kailangan niyang gawin at ako din ganun din.” (MNS)

Chito Miranda weighs in on lack of support for local shows