Sam Pinto on FHM 100 Sexiest: ‘Give others a chance’ 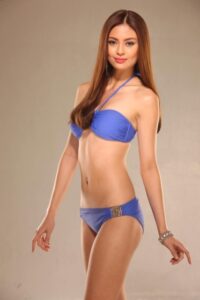 Despite being the odds-on favorite to top this year’s 100 Sexiest Woman poll by FHM Philippines magazine now that last year’s topnotcher Marian Rivera is on the family way, model-actress Sam Pinto said she’s not really looking forward to topping the coveted list for a third time.

“Honestly, my personal thoughts about it is why not give others a chance? I mean, I’ve already been number one twice so I think I’m kinda done with it,” Sam said.

Sam said that although she has not yet decided if she will attend or take part in the annual party event that usually precedes the announcement of the 100 Sexiest, she is not totally ruling it out especially if she still makes the list, regardless of position.

“If fans do vote me in, if they really want me again, then I’ll support them,” she replied.

One of the pioneering VJs of MTV Pinoy, Sam is also a mainstay of the GMA Network shows “Sunday All-Stars” and the gag show, “Bubble Gang”, a fun gig that she always looks forward to every week.

“I haven’t been asked to impersonate somebody in ‘Bubble Gang’ but I’d like to be part of (a spoof) of a viral video. That should be fun,” she confessed.

At this point in her career, what Sam really wants is to flex her acting muscles and be cast in more challenging projects. Last seen on the big screen as the love interest of Jeorge Estregan on “Magnum Muslim .357, Sam said she’d love to indie films if given the chance.

“I always wanted to do indie films. I’m under Viva and they said they’d ask me but they haven’t said anything,” she said. (MNS)