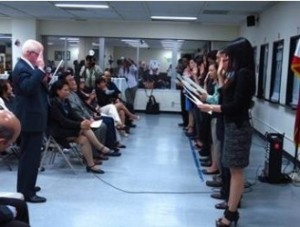 SAN DIEGO, California—“It is not usual for an ambassador to be involved in this kind of things.”  These were the words of San Diego City Mayor Bob Filner, as he lauded the efforts of Ambassador Jose L. Cuisia Jr.’s to inspire the next generation of Filipino Americans and steer their community to greater heights.

Ambassador Cuisia brought along the 2012 Filipino American Youth Leadership Program (FYLPro) delegates to the San Diego City Hall on 31 May during his courtesy call on the former congressman, who once chaired the Committee on Veterans Affairs of the United States House of Representatives.

Ambassador Cuisia congratulated Mayor Filner on his election victory last November.  He noted that San Diego, which calls itself “America’s Finest City,” is home to close to 148,000 Filipino Americans and expressed the hope that the community will be properly represented in the city’s affairs.  The FYLPro aims to address such concerns, as exceptional individuals with leadership skills and proven involvement with political, economic and socio-civic bodies, are being identified to fill this gap.

Ambassador Cuisia met with the young Filipino American leaders and successful entrepreneur Tony Olaes in San Diego this past weekend to further discuss ways to tap the enthusiasm and dynamism of second and third generation Filipino Americans, who are increasingly immersing themselves in various advocacies. Mr. Olaes’ passion in contributing to uplifting the lives of Filipinos mired in poverty has led him to devote much of his time and resources to this pursuit.

Ambassador Cuisia’s meeting with the delegates provided an opportunity for each of them to apprise one another of their respective projects.  Among them is the Teach for the Philippines (TftP) initiative of Angela Lagdameo and Michael Vea.  TftP is the 25th partner of Teach For All, a global network of social enterprises working to expand educational opportunity in their respective nations.  Its mission is to close the education gap that exists in the Philippines by recruiting persons that would volunteer two years of their lives to serve in under resourced schools in Metro Manila. From the US, only six out of over 200 applicants hurdled the stringent requirements to qualify as TftP volunteers.

While in San Diego, Ambassador Cuisia also took the time to meet with members of the Filipino American community at the Cultural Arts Center in the suburb of Rancho del Rey. Organized by 2012 FYLPro delegate Francine Maigue, hundreds of people met the Ambassador and witnessed a program that involved spectacular cultural performances from local artists that included accomplished students of the Miss Francine Performing Arts Academy.

In the same day, the Philippine American Business and Improvement Development (Philam BID) hosted a dinner for its members and special guests in honor of the Ambassador, who was conferred the Philam BID’s Starblazer Agoncillo “Global Filipino Diplomat” award for his outstanding achievement in the field of diplomacy.  In his message, the Ambassador touched on the positive economic developments taking place in the Philippines and urged prospective investors to consider the country as a destination for their capital.   A surprise announcement was made during the dinner by Mayor Cheryl Cox, when she read a resolution making May 31, 2013 “Jose L. Cuisia, Jr. Day” in Chula Vista. ###

Mapping the future of the self-driving car