ARLINGTON, November 2, 2010 (AFP) – Edgar Renteria blasted a three-run homer that powered the San Francisco Giants to their first World Series title in 56 years with a 3-1 victory over the Texas Rangers on Monday.

The Giants won Major League Baseball’s best-of-seven final four games to one to capture their sixth all-time crown dating to 1905, but their first since 1954 and the first since they moved from New York to California in 1958. 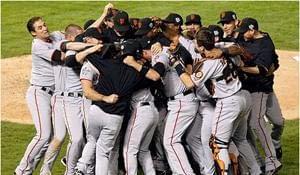 “This is the most amazing feeling I have ever had,” Giants slugger Aubrey Huff said.

A team dubbed “castoffs and misfits” by Giants manager Bruce Bochy, one that did not claim a playoff spot until the last day of a six-month season, earned a new nickname – champions.

“They wouldn’t be denied,” Bochy said. “I couldn’t be prouder of this group.”

Renteria, a 35-year-old Colombian shortstop, blasted his critical homer over the right-centerfield wall in the seventh inning to produce the Series-winning run after a single scored the 1997 Series-winning run for the Florida Marlins.

After a season of nagging injuries, Renteria was named the Most Valuable Player of the 106th World Series after going 7-for-17 at the plate, a .412 average, with two homers and six runs batted in over five games.

“I just tried to hit the ball well,” Renteria said. “It was a tough year for me. I appreciate the organization. They had patience with me. I told myself to work hard and keep in shape because something good is coming this season.”

“That’s an amazing list,” Renteria said. “I feel proud of myself and the team.”

San Francisco’s Tim Lincecum, a long-haired 26-year-old American right-hander who won the Series opener, improved to 4-1 in the playoffs and 2-0 in the Series with a masterful performance on the mound.

Lincecum struck out 10 and scattered three hits over eight innings. He did allow Texas outfielder Nelson Cruz a solo homer in the seventh, and threw 71 strikes in 101 pitches before closer Brian Wilson entered in the ninth and forced the last three outs to touch off a wild celebration by the winners.

“We did it as a team,” Lincecum said. “We put it together and that’s how we won it.”

The Giants’ title drought was the third-longest active frustration streak, half as long as the ongoing wait by the Chicago Cubs and six years less than that of the Cleveland Indians.

“It’s a great thing for the franchise, the city of San Francisco and all the people of Northern California,” Giants owner William Neukom said.

Texas southpaw Cliff Lee, a two-time Cy Young award winner as best pitcher who had been 7-0 in career playoff games until losing the Series opener, threw 6 2/3 scoreless innings before surrendering the homer to Renteria that doomed the Rangers’ quest for the first title in their half-century history.

“Congratulate the Giants. They deserved to win the championship,” Rangers manager Ron Washington said. “Good pitching stops hitting. In this Series, their pitching stood up. That was the difference right there.”

San Francisco’s Cody Ross and Juan Uribe opened the seventh inning with back-to-back singles, pushing a runner to second base for the first time in the game, and Aubrey Huff advanced the runners with a sacrifice bunt.

Pat Burrell, 0-for-11 with nine strikeouts in the Series, came to the plate with a perfect chance at redemption, but struck out with a full count to bring Renteria to the plate.

Renteria smacked a 2-ball, no-strike cut fastball for a homer to silence the crowd and provide all the scoring support Lincecum would need.

Lee and Lincecum staged a masterful pitching duel in the early innings, issuing a baffling mix of lightning-like fastballs, elusive curveballs and deceptive sliders to keep batters from connecting with all their might.

Lincecum surrendered only two hits and one walk in the span while striking out six and Lee allowed three singles with five strikeouts and had a runner reach base on an error.

Mosley trains in his own home in Big Bear

ALA Int’l, ABS-CBN Sports and TFC to showcase world-class boxing