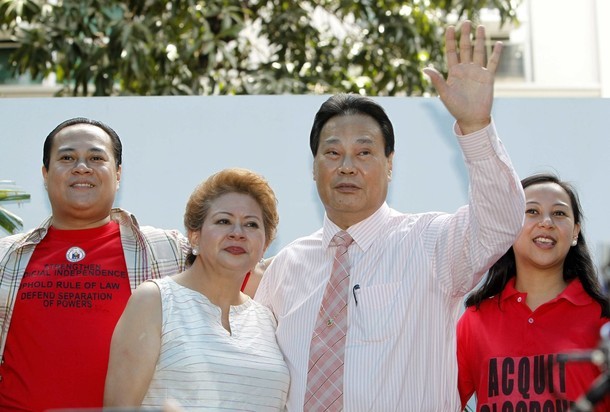 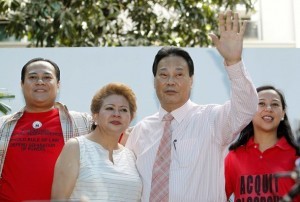 MANILA, May 15 (Mabuhay) – The Sandiganbayan Second Division has ordered the freezing of some P130 million in assets of former Chief Justice Renato Corona and his wife Cristina.

Associate Justice and Second Division chairperson Teresita V. Diaz-Baldos signed the two-page directive, which was dated May 5 but released to the media only on Thursday, May 14.

The writ was attached to the P130-M forfeiture case filed by the Office of the Ombudsman against the Corona couple on March 27, the order said.

“Considering that adequate bases exist which satisfy the requirements set forth under Rule 57 of the 1997 Rules of Civil Procedure, the Court hereby resolves to grant the prayer in said Petition of the issuance of a Write of Preliminary Attachment,” the Sandiganbayan declared.

“The Office of the Ombudsman determined that the Coronas’ unexplained wealth is at least P130,336,212.88,” the panel said, adding the amount is a “conservative estimate” as it does not include their cost of living allowance and expenses entailed during travels abroad.

Magilyn Loja, legal counsel for the ousted chief justice, said their camp has yet to receive a copy of the Sandiganbayan order.

“But once we receive the resolution, we will have to discuss it with our client so our client can take appropriate action,” Loja said.

The lawyer also noted that: “(Corona) is in the Philippines and he has been facing all cases filed against him.”

Corona was impeached in 2011 for misdeclaring his statements of assets, liabilities and net worth (SALN).

He was convicted on May 29, 2012 by the Senate sitting as the impeachment court for betrayal of public trust and culpable violation of the Philippine Constitution.

The freeze order from Sandiganbayan also covers any asset of the Coronas that are found to be held by “dummies, trustees, assignees, nominees, transferees and successors-in-interest.”

The Ombudsman earlier warned that any person found helping the respondents conceal their money and other properties will be impleaded in the case.

Sandiganbayan Sheriff IV Alexander K. Valencia was given 30 days to enforce the writ of attachment and submit a report to the court along with a full inventory of the properties that have been attached. (MNS)