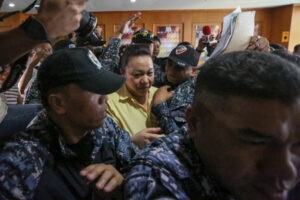 MANILA (Mabuhay) — The Sandiganbayan on Tuesday asked prosecutors in the pork barrel scam cases to file the charges against the next batch of personalities who allegedly benefited from the supposed anomaly.

At the continuation of the bail hearing of Masbate Gov. Rizalina Seacon Lanete, Associate Justice Jose Hernandez, who concurrently chairs the court’s Fourth Division, asked the prosecutors what’s taking them so long in filing the charges against the next batches of suspects.

“File the second and third batch. What are you waiting for? You have a very willing witness. Without her testimony you will have no case,” Hernandez said.

Prosecutor Jorge Espinal, however, told the court that “it’s not our call.”

This exchange came after scam whistleblower Marina Sula told the court that she is willing to testify in other cases that will be filed by the Department of Justice (DOJ) in connection with the alleged scam.

Sula said this even after the court told her it could take 10 more years of her taking the witness stand.

Justice Secretary Leila de Lima had earlier admitted that she is uncertain if she can concentrate on the filing of the third batch of pork barrel scam cases due to other more “urgent” cases she had to attend to.

During Tuesday’s cross examination, Sula, who previously worked for alleged scam mastermind Janet Lim-Napoles, admitted that her fear of going to prison convinced her to accept the government’s offer to be a state witness.

Sula has been admitted to the DOJ’s Witness Protection Program as a permanent state witness after she satisfied the agency’s requisites of the agency. She is, however, bound by certain condition stipulated in her agreement with the DOJ to remain as a state witness.

Before the hearing went on recess, Hernandez again reiterated his call for the DOJ to file the cases.

“People are eagerly waiting for the second and third batch. When important things are happening you have to speak up just like what this witness is doing,” he said.(MNS)