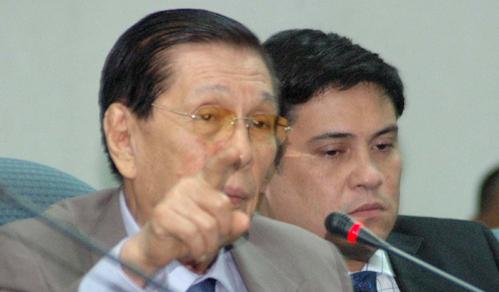 Senate Minority leader Sen. Juan Ponce Enrile, one of the accused in the so-called pork barrel scam, stresses a point in interpellating Senator Koko Pimentel III, sponsor of the Sandigan Bill, who sought the support of his colleagues for the passage of the measure, seeking to improve the disposition of cases in the Sandiganbayan on Wednesday (March 5) at the Session Hall, Senate Bldg in Pasay City. (MNS photo)

MANILA (Mabuhay) – The Sandiganbayan Third Division has denied the request of lawyer Jessica Lucila “Gigi” Reyes, who is facing plunder and graft charges in connection with the alleged P10-billion pork barrel scam, to have access to her personal laptop computer and have Internet connection, saying shemight use these to plan an escape.

“Laptop, computers and tablets with Internet connection can be used by inmates to acquire or gather information to plan their escape and perform other illicit activities,” the court said in a late Monday resolution.

It added that the safety of others detained with Reyes will also be put at stake, if she is allowed to have access to a computer.

“Indeed, the effective management and safety of the detention facility is a valid objective to justify the prohibition on the use of electronic devices, like a laptop computer, in jail,” the resolution said.

Reyes is facing one count of plunder and 15 counts of graft at the Sandiganbayan for the pork barrel scam. Reyes if currently detained at Camp Bagong Diwa in Taguig City.

She is accused of acting on behalf of Enrile in identifying the government-owned and -controlled corporations that became the implementing agencies of the bogus projects funded by his Priority Development Assistance Fund.

Through her lawyers, she earlier asked for access to a laptop with an Internet connection, as well as a printer, to help prepare her defense.

But the Sandiganbayan said she has no reason to need such gadgets since her lawyers have ample access to her files, and can prepare her defense.

“Reyes already has her own counsels who already serve as her tool to attack and to challenge the condition of her confinement,” the decision said. (MNS)