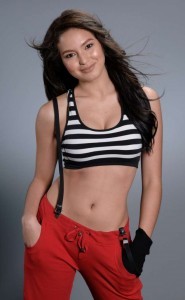 Sarah Lahbati insists that she has no idea why boyfriend Richard Gutierrez referred to her as “Ilaw ng Tahanan” in a recent Instagram post.

What she is pretty much certain is that their relationship is still going strong, as evidenced by the recent cruise that was documented on camera for “It Takes Gutz to be a Gutierrez”, the controversial showbiz family’s upcoming reality show for the E! Channel.

“Ang haba ng hair ko,” she exclaimed when asked how she feels about Richard’s very public display of affection towards her. “He’s an amazing person. We’re very happy and our relationship is very, very stable”.

Although she declined to comment if there are wedding plans in the horizon, the radiant aura and cheerful demeanor of the towering 20-year-old Filipino-Swiss actress is an indication that tying the knot is not yet part of her immediate plans.

Getting her career back on track certainly is.

After leaving for Switzerland last year in the wake of a much-publicized contract dispute with GMA Artist Center, she came back to the country and has since settled her differences with network executives who welcomed her back with open arms.

Last Sunday, she was warmly received in her public appearance on her home network on “Sunday All-Stars” where the studio audience cheered her performance of Drake’s “Hold On, We’re Going Home”.

In an unexpected but welcome gesture, GMA has also given its blessings for her to do “More Than Words” for TV5. Written by Keiko Aquino and directed by Jon Red, the Mother’s Day special also stars Ms. Alice Dixson, Carl Guevarra, Mark Gil and Jackie Lou Blanco. In this made-for-TV movie, Sarah plays a passive-aggressive rocker chick who will later learn that she’s adopted and is actually the daughter of a convict with a speech defect.

“I’m both excited and nervous to be a part of this project. We have a great cast and creative team. I’m looking forward to working with Ms. Alice Dixson who plays my mother here,” Sarah enthused.

Asked what are her thoughts on the declaration of TV5 chief content entertainment officer Wilma V. Galvante that she expects “More Than Words” to be of award-worthy caliber, Sarah confessed that her heart started to beat a little faster when she heard it.

“Nakakatuwa na nakaka-pressure. But Ms. Keiko wrote such a beautiful script so I can’t wait to start taping on this project. I just want to enjoy and give it everything I’ve got.”

Sarah added she’s also very grateful to GMA for allowing her to work with TV5.

“I’m just happy that everything is falling into place. Actually, I said this before and I’ll say it again. Since I came back, people have been asking me, what’s the one thing that I missed and I always say, it’s acting. I’m just excited to be able to work again,” she happily concluded. (MNS)

Jane de Leon cuts hair short for role, but is it for ‘Darna’?