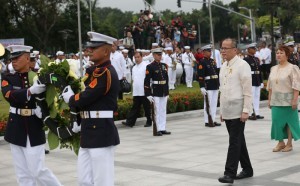 President Benigno S. Aquino III offers a wreath during the commemoration of the 118th anniversary of the martyrdom of Dr. Jose Rizal at the Rizal National Monument in Rizal Park, Manila City on Tuesday (December 30), with the theme: “Rizal 2014: Dunong at Pusong Pilipino.” Also in photo is National Historical Commission of the Philippines chairperson Dr. Maria Serena Diokno. (MNS photo)

MANILA (Mabuhay) – Satisfaction with the Aquino administration was still rated “good” in the fourth quarter of 2014, despite a drop in the Metro Manila, Visayas, and Mindanao satisfaction numbers, according to a new poll taken by the Social Weather Stations.

According to the poll, 58 percent of adults nationally were satisfied, while 24 percent were dissatisfied, and 17 percent were ambivalent with the government’s general performance.

Meanwhile, the administration’s net satisfaction rating fell a step to “moderate” from “good” in Metro Manila, stayed “good” in the Visayas and Mindanao despite a points loss, and rose to “good” from “moderate” in Balance Luzon.

In Metro Manila, the administration’s net satisfaction score was down 15 points to a “moderate” +21,  from a “good” +36 in September.

Satisfaction in the Visayas stayed in “good” territory despite the 14 point drop to +31 from the third quarter’s +45.

Mindanao satisfaction also stayed “good,” also despite a points loss; from +46 in the third quarter to +43 in the fourth.

In contrast, satisfaction in “Balance Luzon” was up 11 points to +35 in the fourth quarter, from +24 in the third quarter.

The SWS poll was taken from  Nov. 27 to Dec. 1 among 1,800 adults. The survey has sampling error margins of ±2% for national percentages; ±6% each for Metro Manila, “Balance Luzon” and Mindanao; and ±3% for the Visayas.

The poll results were posted in the Business World website.

Satisfaction with the Aquino administration stayed “good” in all the socio-economic classes.

Net satisfaction among Class ABC fell six points to +41 from +47. Since September 2010, public satisfaction scores in Class ABC had been above +40 in 14 out of 18 surveys.

The SWS pointed out that 2014 had ended with President Benigno Aquino III’s satisfaction numbers at their highest in three quarters,  a “good” +39 from September’s +34, and June’s “moderate” +25.

Compared to this, satisfaction with other key government officials, except that of Chief Justice Maria Lourdes Sereno, and top government institutions, declined as 2014 ended.

The Aquino government was rated “good” in seven issues, “moderate” in four, “neutral” in another four, “poor” in one and “bad” in another.

The “good” scores were on:

Peace efforts to continue even without BBL passage – Iqbal