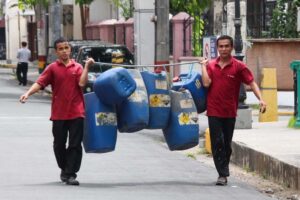 Ambulant vendors sell water containers for a hundred pesos each to residents affected by water interruptions in Intramuros, Manila on Monday. Maynilad will be installing a seven-foot-tall pipeline along Hermosa Street in Tondo, Manila to give way to a government flood control project. (MNS photo)

MANILA (Mabuhay) — Bayan Muna party-list on Tuesday asked the Supreme Court to stop the government from paying Manila Water and Maynilad for the alleged losses the concessionaires incurred after they were disallowed from recovering their corporate income taxes by hiking their water rates.

In a petition, Bayan Muna party-list Reps Neri Colmenares and Carlos Zarate insisted that corporate income taxes of the two concessionaires cannot be considered as expenditures and cannot be passed on directly or indirectly to water consumers.

The lawmakers asked the tribunal to issue a temporary restraining order or a writ of preliminary injunction to prevent the water firms from recovering their income tax liabilities from national coffers.

The group cited the so-called Meralco ruling in November 2002 that declared that income tax payments cannot be considered as expenses incurred by public utilities when generating profit.

Prior to the SC ruling, Manila Water and Maynilad were initially allowed to include corporate income tax as expenditures and pass it on to consumers by way of tariff during the first rate rebasing exercise in 2002.

Despite the SC ruling, the water concessionaires argued they are not public utilities but merely agents and contractors of MWSS.

The MWSS eventually sided with the concessionaires and declared them not as public utilities but as agents and contractors, allowing Maynilad and Manila Water to once again recover their corporate income taxes through tariff during the second rate rebasing in 2007.

On October 26, 2010, however, the MWSS issued another opinion, this time declaring the concessionaires as public utilities.

In 2013, both concessionaires ran to the International Chamber of Commerce to seek arbitration in determining whether the two firms are public utilities and whether corporate income tax is recoverable expense.

In December 2014, Maynilad got an arbitral award, but MWSS said it would await the ruling on Manila Water’s arbitration plea before making any pronouncement on applicable resulting water rates.

On February 20, 2015, Maynilad claimed the deferment of the implementation of the rate adjustment has caused significant amounts in lost revenues.

Finance Secretary Cesar Purisima, on the same day, informed President Benigno Aquino III that “a call on the undertaking letter may potentially result in the government having to pay Maynilad over P5 billion for the period January 2013 to January 2015, and P208 million for every subsequent month of delay.”

The MWSS then submitted its position to Purisima that Maynilad would not incur losses due to the deferment of the implementation of the water rate hike in the arbitral award. Purisima, however, last March stood by his position that the government could end up paying Maynilad.

The petitioner claimed that Maynilad’s revenue losses amount only to P3.44 billion but Purisima’s letter to the President indicated a payment of P5 billion, a difference of P1.56 billion.

Last April, the arbitration proceeding between MWSS and Manila Water was finally decided, with the appeals panel ruling that Manila Water is a public utility and cannot pass on its corporate income tax to consumers.

Just the same, Manila Water supposedly still demanded that the Department of Finance must compensate the concessionaire for over P79 billion of potential revenue losses from 2015 to the end of its 25-year contract with the government.

In its petition, the party-list lawmakers said the letters of undertaking executed by the government to pay Maynilad and Manila Water should be declared void for being unconstitutional and illegal.

“Petitioners pray of this honorable court that… Respondents Sec. Purisima and President Aquino be prohibited from processing respondents Maynilad and Manila Water’s claims for alleged damages against the sovereign guarantee embodied in the republic’s letters of undertaking,” read the petition.

The petitioners said Purisima and Aquino should be prevented from paying out of the national coffers any amount to Maynilad and Manila Water for alleged damage claims against the “sovereign guarantee” embodied in the government’s letters of undertaking.(MNS)