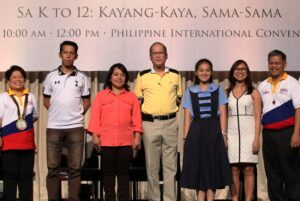 MANILA, July 1 (Mabuhay) — The Supreme Court has decided to consolidate a petition from teachers and students of the Manila Science High School with five other pleas against Republic Act 10533 or the Enhanced Basic Education Act of 2013, which paved the way for the controversial Kindergarten to Grade 12 or K to 12 program.

At the same time, the SC ordered the respondents—President Benigno Aquino III and Education Secretary Armin Luistro, among others—to comment within 10 days on the petition filed by a group of officers of the MSHS Faculty and Employees Club, as well as MSHS students and their parents.

In its petition, the petitioners asked the tribunal to void for being unconstitutional RA 10533 and Department of Education Order No. 31, Series of 2012, which were the bases for the implementation of what they branded as a “diluted” K-12 program.

The petitioners said the K-12 program “denied the school’s students the education they are entitled to as gifted and talented learners,” because it “diluted” the MSHS’s special science curriculum by discarding a number of math and science subjects.

They said Congress also violated the students’ rights to due process, to equal protection, and to select a course of study when it crafted RA 10533, “by unfairly and unreasonably requiring them to attend two additional years of senior high school as a pre-condition to entry to college.”

They said Luistro and the other respondents committed grave abuse of discretion when they implemented the K-12 program without prior consultation with parents and teachers.

They also said the curriculum under the K-12 program, implemented at the MSHS in 2012, should not have been implemented yet that year because the law was still being deliberated by Congress that time.

The petitioners added that RA 10533 should be applied prospectively and should only cover students who started kindergarten in 2013.

The petitioners asked the high tribunal to stop the implementation of the current curriculum under the K-12 program, and restore the special science curriculum by coming up with “remedial measures” to ensure the math and science subjects discarded under K-12 will be taught to the students.

Likewise, they also insisted before the SC that the Grade 10 students affected by the K-12 program should still be allowed to apply and take college entrance exams.

Five other petitions have been filed in connection with RA 10533. Four of them that oppose the K to 12 program included:

– a group led by Sen. Anotnio Trilanes IV;
– the “Coalition for the K to 12 Suspension,” composed of four individuals and 16 groups led by the Council of Teachers and Staff of Colleges and Universities of the Philippines;
– a group led by National Artist Bienvenido Lumbera and the Makabayan bloc of party-list groups; and
– a group that included minor petitioners represented by their parents.

The fifth petition—filed by a group of university professors, party-list lawmakers, and student activists—particularly targeted Commission on Higher Education Memorandum Order No. 20, Series of 2013, which abolishes mandatory subjects in college such as Filipino language, Literature, and Philippine Government and Constitution.(MNS)

No direct ‘pork’ talks with Enrile, only with his former aide – Ruby Tuason