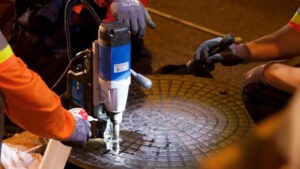 SCE will be providing a $100 bill credit, in addition to the last $100 bill credit from the previous outage, to those who were without power for more than 24 hours during the latest outage in downtown Long Beach. Crews have also already started tethering more than 300 manhole covers to underground electrical vaults in the area as a safety measure.

Southern California Edison (SCE) will provide a $100 bill credit to those who were without power for more than 24 hours during the latest outage in downtown Long Beach, and crews have begun tethering more than 300 manhole covers to underground electrical vaults in the area as a precautionary safety measure.

All customers who were without power for more than 24 hours during the July 30 Long Beach outage will get a $100 bill credit. Depending on their billing cycle, the credit will appear on the next bill or the one after that. This will be in addition to the $100 bill credit being given to eligible customers for the previous outage, which occurred on July 15. SCE will be sending letters to those customers affected along with information as to when the credit will appear on their bills.

The two outages in downtown Long Beach occurred within weeks of each other, and impacted thousands of SCE customers. Most had power restored within a few hours, but many experienced extended outages as crews worked to restore power as quickly and as safely as possible.

The manhole tethering project comes after the system failure resulted in manhole covers becoming dislodged. Crews will attach a steel cable to each lid and secure it to the wall of the vault. The work is not expected to cause any outages.

It will take up to three hours to tether each structure. Once in place, the tether will restrict the manhole cover from traveling more than two feet away. Safety is SCE’s top priority.

“We think this is a prudent safety step in light of the rare incident in Long Beach last week,” said Greg Ferree, SCE vice president of Distribution Business Line. “We continue to investigate the cause of the outage and appreciate the public’s patience.”

SCE crews plan to do the tethering work during the daytime in residential areas and at night in commercial locations. The main arteries affected will be Ocean Boulevard, Long Beach Boulevard, Pine Avenue and Pacific Avenue. SCE will continue to share information with Long Beach residents as updates become available.

No work will be done on Friday or over the weekend. If additional time is required, the project will resume early Monday and is expected to be completed by Aug. 13.

Crews will continue the work necessary to ensure that SCE’s electrical system in Long Beach is safe and reliable. SCE thanks the city of Long Beach for its cooperation and for the important safety efforts of first responders in the Long Beach Fire and Police departments.

The trafficking of children in the Philippines