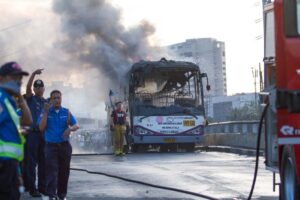 Firefighters try to extinguish the fire on a burning bus at the northbound lane of the Ayala flyover Wednesday. No one was reported hurt in the incident that caused massive traffic and suspension of the of the Metro Rail Transit operation. (MNS photo)

MANILA (Mabuhay) – Senator Antonio Trillanes IV on Thursday revealed that he has filed a resolution expanding the scope of the Senate Blue Ribbon sub-committee probe on the corruption allegations against Vice President Jejomar Binay.

Trillanes said he filed last Tuesday, January 20, proposed Senate Resolution 1114 which seeks to look into the alleged anomalies at the Home Development Mutual Fund (Pag-IBIG) and the Boy Scouts of the Philippines (BSP), where Binay serves as Board of Trustees chairman and president, respectively.

The ongoing sub-committee probe was launched by virtue of Senate Resolution 826, which deals with the alleged overpricing of the Makati City Hall Building II and “other related anomalies committed by past and present Makati City Hall officials.”

Trillanes and Senator Alan Peter Cayetano earlier alleged that Vice President Binay, as concurrent chair of the Housing and Urban Development Coordinating Council (HUDCC) and chairman of the Board of Trustees of Pag-IBIG Fund, struck anomalous deals with favored housing project contractors in order to pocket public funds.

Pag-IBIG president and CEO Darlene Berberabe has denied the allegation, saying her agency does not award contracts to property developers.

Ernesto Mercado, a former ally of Binay in Makati, also alleged that Binay, as BSP president, got almost P200 million in kickbacks from a deal between the BSP and Alphaland Corp. for the development of a one-hectare prime property in Makati City.

Binay’s camp has repeatedly criticized the Senate sub-committee for going beyond what the first Senate resolution has set. The vice-president also believes the Senate probe’s primary purpose is to hurt his chances in the 2016 presidential elections. (MNS)

Palace: Proper procedures to be followed in deporting Laude BF

One more time: Is “Medicare portability” necessary? By Leo Monsalud