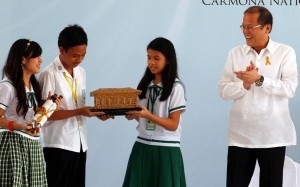 House Committee on the Welfare of Children chairperson Zamboanga del Sur Representative Aurora Cerilles said House Bill 4907 would help secure children’s well-being and safety at home, school, workplace, and all other settings. Cerilles said it is imperative to establish a legal framework that will protect the young Filipinos. House Bill 4907 is in substitution of House Bill 155, authored by Tarlac Representative Susan Yap. Photo shows President Benigno S. Aquino III as he receives a School Building Replica from three high school student during the ceremonial turnover of 66,813 accomplished classrooms at the Carmona National High School (CNHS) in Carmona, Cavite on Monday (Feb. 3, 2014).
(MNS Photo)

Underprivileged students will also be given priority in receiving grants-in-aid, especially those whose families are recipients of the state-sponsored conditional cash transfer program, according to the bill.

Regardless of their economic status, students experiencing liquidity problems will get first shot at student loans.

The Senate bill further seeks to establish a socialized tuition fee scheme based on the student’s personal circumstances, family income and socio-economic characteristics which will serve as guide for state universities and colleges and public technical-vocational institutes throughout the country.

While there are hundreds of thousands of poor but deserving students, the Commission on Higher Education’s (CHED) student financial assistance programs in 2011 only served 60,000 or 2 percent of 2.7 million tertiary-level students, the bill’s co-author, Senator Juan Edgardo Angara, said.

“Government had in place up to 62 student financial assistance programs across 17 agencies. Though some programs performed fairly well, a majority had low coverage,” he said.

More worrisome were the results of a CHED-commissioned study that showed how these programs were increasingly enjoyed by student beneficiaries from higher income families, the senator pointed out.

While each government agency administered their student assistance program, not a single tracer study was conducted to check whether the assistance government extended had actually reached those who deserved it and whether such assistance helped students land decent jobs and earn higher salaries, he said.

“Tertiary education, a proven stepping ladder towards a better life, remains inaccessible and expensive to many. Hopefully, through such scheme, we step closer to realizing our goals of having one college graduate in every Filipino family. We as a country pay a bigger price when we fail to provide our people enough options and opportunities at availing an education,” the senator added. (MNS)

Another devotee dies in Nazarene procession

Southern California’s largest community tradition of Filipino arts and culture, the Festival of Philippine Arts and Culture (FPAC) celebrates its 22nd Annual with the theme Pag-Ugnay, Paglago at Pagbabago