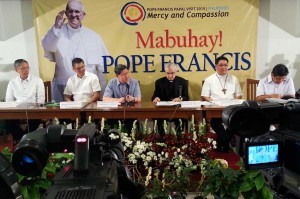 In a press statement issued Thursday, Binay asked Sen. Ferdinand Marcos Jr., chairman of the committee on local government, to invite the ‘citizen leaders’ earlier tapped by President Benigno Aquino III to review the proposed BBL to be present at the hearing.

It seeks to create the Bangsamoro political entity which will replace the Autonomous Region in Muslim Mindanao. It will also specify wealth- and power-sharing arrangements between the national government and the new political entity.

The hearing on April 13 will be the first since the incident happened. The leadership of both houses of Congress wanted the BBL to be passed by June 2015.

On the other hand, the Senate committee on constitutional amendments, revision of codes and law headed by Senator Miriam Defensor Santiago, was tapped to conduct hearings on the constitutional issues surrounding the BBL.

At least two hearings were conducted by the panel after the Mamasapano incident.

Santiago earlier said she has finished her report but she will not release it until the main committee, headed by Marcos, is done with its hearing. She said her input will be part of Marcos’ report.  (MNS)