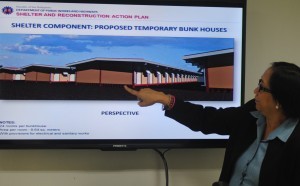 Department of public work and Highways (DPWH) OIC-Director Beth Pilorin shows the scale model for the construction of temporary shelter for families affected by super typoon ‘Yolanda’ in Samar and Leyte on Tuesday (November 26, 2013) at the DWPH head office in Port Area, Manila. DPWH Secretary Rogelio Singson said works are on-going for the construction of bunkhouse units in 4 sites in Tacloban City, Palo (Leyte), and Basey and Marabut towns in Samar. (MNS photo)

MANILA (Mabuhay) – Temporary shelters built for survivors of Typhoon Yolanda (Haiyan) were not overpriced, but did not meet specifications and international standards, a Senate committee has concluded.

In a report dated May 21, the Senate public works committee ruled out overpricing in these bunkhouses, since contractors who built these structures “have not yet been paid even with a single centavo” by the government.

The panel, however, concluded that the temporary shelters were substandard and did not comply with internationals standards, mainly due to the lack of proper construction materials during the disaster’s aftermath.

“The prevailing emergency situation compelled the government to construct bunkhouses despite the lack of quality resources in order to save lives, which is more important than compliance with technicalities of the law,” the committee report stated.

The Senate committee did not recommend any sanctions against government officials or contractors involved in the building of these bunkhouses.

About 1.1 million houses were destroyed when Yolanda, one of the strongest typhoons to ever make landfall, hit central Philippines in November last year. Over 6,100 individuals have been confirmed dead due to the super typhoon, based on latest government records.

At a press conference on Wednesday, presidential spokesperson Edwin Lacierda said Public Works Sec. Rogelio Singson and his department have made “revisions” to the bunkhouses.

“They have increased the size, I think, of per bunkhouse. We have… Secretary Singson was here and I think they have made alterations as a result of those concerns,” he said.

Last January, Singson admitted “there might be a possibility that some of the contractors may have not followed the specifications, and therefore we call them—we refer to them as underspecs.”

He said the original design of each bunkhouse specified 24 units or rooms — one for each family – measuring 8.64 square meters. But he said the units were “too tight” so they adjusted the size and reduced the number of units per bunkhouse to 12 rooms, each measuring 17.28-square meters.

Four units of toilets and showers, and a common cooking area will also be installed in each bunkhouse.

For the roofing, he said they specified galvanized iron sheets that are 0.40 millimeter thick.

Singson said each 8.64-square unit costs P34,834 while each 17.28-square meter unit costs P65,715 to build. He said this may seem expensive, but he noted that the public has to understand the agency is trying to address an “the emergency situation.”

The Cabinet official also earlier said they had originally planned to build 222 bunkhouses in municipalities that have identified relocation sites but that construction was suspended because they changed the specifications from 24 units to 12.

As of January, he said they have completed 126 bunkhouses.

The Senate committee also noted how the Department of Social Welfare and Development (DSWD) imposed “stringent requirements” that slowed down the transfer of families affected by Yolanda to these bunkhouses.

“The extremely bureaucratic processes have hindered family-beneficiaries to immediately occupy these bunkhouses despite the emergency situation that they were confronted with,” the panel’s report read.

Efforts to secure affected families were “defeated” by the DSWD’s “impractical technicalities,” the committee said.

Due to this, the Senate panel told the DSWD streamline its process of identifying family-beneficiaries that will get government aid during disasters.

The Senate public works committee also came out with legislative proposals, such as the setting of “minimum design guidelines” for temporary shelters under the National Building Code (Republic Act 6541).

The committee also proposed the creation of a Department of Housing and Urban Development to focus on the “access and affordability of basic housing” in the country.

The Government Procurement Act (Republic Act 9184) should also be amended to include provisions against “unscrupulous” contractors and government officials taking advantage of disasters, the panel added.

The committee also asked police investigators to continue its probe on possible collusion between contractors and government officials to benefit from the construction of the Yolanda bunkhouses. (MNS)

Egypt’s army stands aside as protesters vow to top 1M