Senate to gather documents in city hall vs. Binays — Trillanes 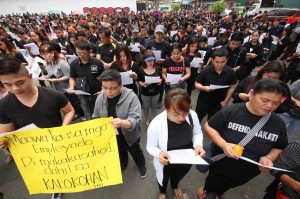 MANILA (Mabuhay) — Makati Mayor Junjun Binay’s decision to temporarily leave city hall and abide by the six-month preventive suspension of the Ombudsman will allow the Senate to gather more proof in connection with the corruption allegations his family is facing, Senator Antonio Trillanes said Wednesday.

Trillanes, a staunch critic of Mayor Binay’s father, Vice President Jejomar Binay, is one of three senators who led the Senate blue ribbon subcommittee investigation on the supposed involvement of the Binays in the allegedly overpriced construction of the Makati City Hall Building II.

The panel is also looking into other corruption issues against the Binays and their allies.

The Vice President and his son are also facing graft charges before the Ombudsman due to supposed overpricing of a Makati Science High School building.

The Makati City Hall has been the second home of the Binay family since Vice President Binay was appointed mayor in 1986. Since then, his wife, Dra. Elenita and son, Junjun, have also been elected as city mayor.

Meanwhile, Trillanes said Mayor Binay’s decision is a challenge to acting city mayor Romulo “Kid” Peña Jr. to step up and perform the duties expected of him.

Mayor Binay earlier alleged that the ruling Liberal Party is behind the “grand plan” of taking over the local government of Makati through Pena. The ruling party has since denied the allegation. (MNS)