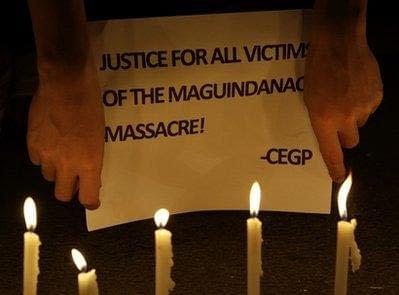 Philippine Deputy Speaker of the House of Representatives, one of the main guest speaker at the observance of the 3rd Anniversary of the Maguindanao Massacre along with Philippine Daily Inquirer columnist Benjamin Pimentel (left), shares his thoughts before the members of the media and other guests who attended the event held Wednesday at the Filipino American Community of Los Angeles (FACLA) Social Hall in the Filipinotown. Photo: Benny Uy

MANILA, (Mabuhay) – Senator Francis “Chiz” Escudero intends to file a resolution to look into the alleged bribery of prosecutors involved in the Maguindanao massacre case and the kin of victims of the gruesome murders.

The private and public prosecutors in multiple murder case are squabbling over allegations of bribery.

Private prosecutor Nena Santos, who represents Maguindanao Gov. Esmael Mangudadatu, also claimed to have been offered bribe money by the camp of the accused. Santos said she rejected the offer, and the money supposedly went instead to the public prosecutors.

Earlier, Myrna Reblando, widow of slain Manila Bulletin reporter Alejandro Reblando, revealed that members of the Ampatuan clan tried to bribe her with P3 million to drop the case.

Some members of the Ampatuan clan and many others are facing multiple counts of murder for allegedly killing 58 individuals, including 32 journalists, in November 2009.

Among those arraigned were eight prominent members of the Ampatuan clan, including Andal Sr., who is a former governor of Maguindanao, and his sons, Andal Jr., Rizaldy, and Sajid.

The victims’ convoy was on its way to file the certificate of candidacy of Mangudadatu, when they were kidnapped, killed and subsequently buried in Ampautan Town. Among those killed were Mangudadatu’s wife, his two sisters, journalists, lawyers, aides, and motorists who were witnesses or were mistaken as part of the convoy. (MNS)

Palace: Proper procedures to be followed in deporting Laude BF