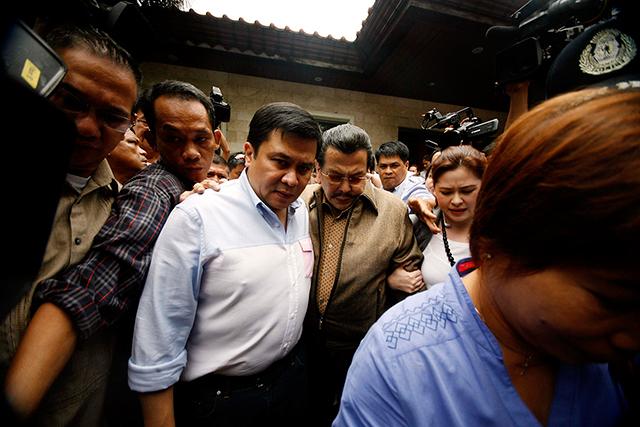 First it was fellow Sen. Bong Revilla who surrendered; Enrile next?

Senator Jose “Jinggoy” Estrada, 51, gave himself up to police after the Sandiganbayan anti-graft court said it found probable cause to proceed with the charges and issued an arrest warrant.

“I never stole a single centavo from government coffers,” a defiant Estrada told reporters, as he accused President Benigno Aquino of playing politics and cracking down on his opponents.

“At the end of the day, I will prove my innocence,” he said. “I will face all charges against me in court.”

Flanked by his father Joseph Estrada, the senator then boarded a white van trailed by a long line of media vehicles for a short drive to the police headquarters, where he turned himself in.

Estrada is among 54 people indicted for an alleged scam in which lawmakers, their staff, and other officials are accused of embezzling millions of dollars alloted for development projects.

In particular, Estrada is accused of pocketing 183 million pesos (about $3.4 million) in “pork barrel” funds that were allegedly diverted to ghost projects.

He has been charged with one count of “plunder”, a non-bailable offence referring to massive corruption, punishable by life imprisonment. He also faces 11 lesser counts of graft.

Another senator, Ramon Revilla, was arrested Friday on similar charges, while the courts are expected to soon issue an arrest order for a third senator, Juan Ponce Enrile, a 90-year-old veteran politician who was once dictator Ferdinand Marcos’s chief martial law enforcer.

The case erupted last year when businesswoman Janet Napoles was accused of colluding with lawmakers to embezzle an estimated 10 billion pesos ($230 million) from legislator’s “pork barrel” funds, or money for their pet projects.

Napoles initially denied any wrongdoing, then in a failed effort to turn state witness gave prosecutors a list implicating more than 100 lawmakers. She has also been charged with plunder.

Two of those on the list are now Aquino cabinet members, although they deny the charges and say Napoles is trying to spread false information to deflect blame from herself and the other key players.

Corruption has long been a problem in the Philippines’ brand of free-wheeling democracy, and accounts for much of the massive poverty in the Southeast Asian nation of 100 million.

The elder Estrada himself was ousted from the presidency midway through his six-year term in 2001 for massive corruption and incompetence.

He was later convicted, but was subsequently pardoned. Last year, he was elected as mayor of the capital Manila, in what he said was a vindication, proving his innocence.

Pacquiao, a 6-1 favorite over Mosley