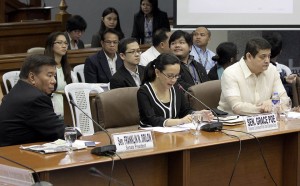 MANILA (Mabuhay) – The leaders of the Senate committees which looked into the bloody Mamasapano clash stood by their report Monday amid the ‘concern’ aired by the Commission on Human Rights.

Senator Grace Poe, head of the Senate committee on public order and dangerous drugs, said the joint committee report was based primarily on the testimonies of resource persons given under oath as well as documents and reports officially submitted to them.

“The attribution of massacre refer to the use of excessive force and ignominy which attended the finishing touches inflicted on the SAF troopers when they were already gravely injured but breathing as they lie defenseless on the Mamasapano cornfields,” Poe said.

At the same time, Poe urged the CHR to provide the Senate a copy of its own report on the incident.

“A contrary view of CHR chairman notwithstanding, we welcome her submission of the CHR report on its own investigation on the incident which may still be considered on [the] amendments (of the Senate report),” she said.

For his part, Senator Francis Escudero, head of the Senate committee on finance, insisted that the Mamasapano clash is a massacre.

He also reminded the CHR that even police officers and soldiers have human rights.

In a statement over the weekend, Rosales said the Senate committee report “give the appearance that emotion, rather than objectivity, prevailed in the articulation of its findings.”

She added that the firefight between the SAF and Moro Islamic Liberation Front on January 25, when the police officers attempted to arrest Malaysian terrorist Zulkifli bin Hir alias Marwan in Mamasapano, Maguindanao, was not a massacre as the SAF were not necessarily “helpless or unresisting.”

“Since when did CHR become editors? Why don’t they make their own report and not meddle with Senate business,” Sotto said in a text message to GMA News Online.

A total of 20 senators have already signed the committee report but others have also expressed readiness to amend it for clarification.