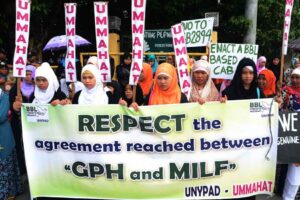 MANILA (Mabuhay) – At least three senators on Friday warned the Moro Islamic Liberation Front against threatening Congress on what the armed group will do once it fails to get the Bangsamoro Basic Law passed in the form it prefers.

“Threatening Congress might be counter-productive and they stand to lose friendly forces who also want peace in Mindanao,” Senator Juan Edgardo Angara said.

“My advice to them: Do not threaten Congress,” Recto said in a text message.

He said that the BBL must be constitutional and Congress must clearly define the powers and resources the national government is willing to give the regional government.

“I am in favor of giving more power and resources to them,” he said.

“Respect local autonomy of local government in the area,” he said.

Further, Recto said there must be fair elections in the region without guns, goons, and gold.

Senator Sergio Osmeña, meanwhile, said the halt on the decomissioning would mean that “the war will continue. Let us cross that bridge when we get to it.”

At least 14 senators have expressed readiness to interpellate. Among those who have already finished their interpellations were Senators Pia Cayetano, Bam, Aquino, and Aquilino Pimentel III.

Senator Ferdinand Marcos Jr. earlier said it would take up to six weeks for Senate to wrap up its plenary discussions on the substitute bill Basic Law for the Bangsamoro Autonomous Region (BLBAR), three weeks for interpellation and another three weeks for amendments.

In the process, changes, revisions, or deletions in the bill will be proposed as committee amendments by the Committee on Local Government, through Marcos being its chairman, and any senator as individual amendments. (MNS)