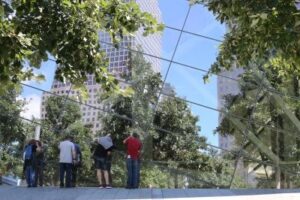 (New York–AFP) – About 2.7 million people have visited the September 11 museum in New York since it opened a year ago, museum officials said on its anniversary.

The visitors came from all 50 US states and 150 different countries to tour the National September 11 Memorial Museum in New York, they said.

About 4.2 million people visited the Statue of Liberty, a key tourist attraction in the city, during the same period.

The September 11 museum, which first opened May 15, 2014 to only locals and the families of the victims, has since hosted President Barack Obama, former president George W. Bush, Britain’s Prince William and his wife Kate, Indian Prime Minister Narendra Modi and Australian Prime Minister Tony Abbott.

To mark its first anniversary, the museum — built on the site where the World Trade Center towers once stood in southern Manhattan — opened an exhibit of photographs by Jonathan Hyman called “Beyond Ground Zero.”

The show focuses on public tributes paid to the victims and on search and rescue efforts at Ground Zero immediately after the attacks on the Twin Towers.