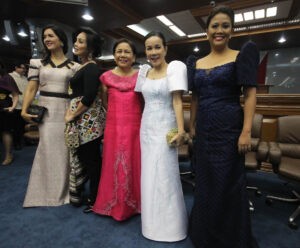 — Five of the six female members of the Senate pose for a souvenir photo in their colorful attire before the opening of the 3rd and last Regular Session of the 16th Congress at the Senate Building in Pasay City on Monday (July 27, 2015). They are (from left) Senators Pia Cayetano, Loren Legarda, Cynthia Villar, Grace Poe and Maria Lourdes Binay. Not in photo is Senator Miriam Defensor Santiago. (MNS photo)

MANILA (Mabuhay) – The oral argument regarding the disqualification case against Sen. Grace Poe will focus on the issue on whether she is a natural-born Filipino.

On Friday, Poe’s lawyer, Alexander Poblador, told reporters that Senate Electoral Tribunal chairman Associate Justice Antonio Carpio himself suggested that the residency issue be dropped as it was deemed a “non-issue.”

Half an hour was all that was needed for the SET to discuss how to go about with the scheduled oral argument on September 21 regarding the disqualification case filed by Rizalito David, a defeated senatorial bet in the 2013 polls.

After emerging from the conference, Poe said she attended the meeting to defend herself against David’s accusations that she is not a natural-born Filipino.

Her camp later issued a statement quoting Poe’s lawyer, Alexander Poblador, as saying that the complaint was a ploy to prevent the senator from seeking a higher post in 2016. Poe, however, has yet to categorically state her political plans for 2016.

Before the start of the preliminary conference, David insisted he did not commit any forum shopping when he filed the cases against the lawmaker before the SET and the Comelec.

For her part, Binay assured the public that she would be fair in deciding on Poe’s case even if her fellow lawmaker is a possible rival of her father Vice President Jejomar Binay in the 2016 presidential elections. (MNS)