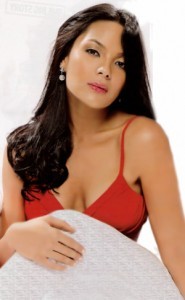 In an interview after the premiere of the Metro Manila Film Festival (MMFF) entry, Cuneta said she can’t help but be a proud mother because Concepcion’s acting in the Chito Roño-dircted movie was more than what she expected.

According to the veteran actress, Concepcion enjoyed shooting the action scenes.

“She used to train five hours a day daw. Sabi ko nga she did my dream eh, kasi I love action. I’m proud. I survived it with some deep breathing. I loved the movie, really nicely made,” she said.

Meanwhile, Cuneta’s husband, former Senator Francis “Kiko” Pangilinan, said he became a little emotional when he saw Concepcion on the big screen all grown up.

“May mga scenes na naaalala mo nung nine years old pa siya, you have to remind yourself na 20 years ago pa iyan. Everyone should watch. Magandang pelikula,” he said.

Like Cuneta, Pangilinan said he is also very proud of Concepcion.

“Boy Golden” will be released in theaters beginning December 25 along with the other MMFF entries. (MNS)