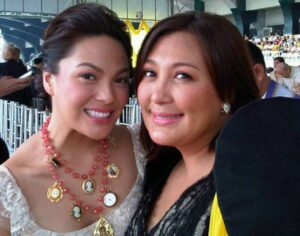 Sharon Cuneta has vented her frustration over her daughter KC Concepcion’s “unnecessary too-sexy poses,” saying she is hurt whenever she sees the young actress’ daring outings.

The “Your Face Sounds Familiar” judge aired her sentiment in a comment thread on her Facebook post Friday about Frankie, her daughter with former senator Francis Pangilinan, and their first TV commercial together.

Cuneta was asked by a follower, Dany Pascual, for her reaction to a photo of Concepcion wearing a bra underneath a coat to pair with her trousers and boots.

The photo appears to have been taken during dance group G-Force’s culminating activity for its summer workshop last May 26 at the Mall of Asia Arena in Pasay.

Concepcion, 30, took the stage as a guest performer wearing the same outfit.

According to Cuneta, the photo is not the first time she was shocked by Concepcion’s choice of outfits or poses for a public material.

Concepion, Cuneta’s only child with ex-husband Gabby Concepcion, was known for her sweet image when she joined showbiz in 2008. In recent years, she has embraced a more daring persona which also translated to her roles onscreen. (MNS)

LJ Reyes on forgiving Paolo Contis: ‘I’m working on it’