Should you be excited about the new Surface? 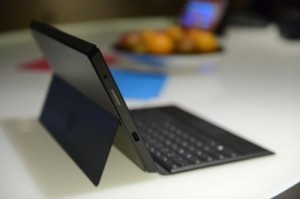 Surface Windows 8 Pro
The next-generation Surface is expected to feature an improved kickstand and a second battery built into its removable keyboard.
©Microsoft

(Relaxnews) – What to expect when Microsoft officially takes the wraps off its next-generation tablets on September 23.

The software giant has found its first year as a hardware manufacturer more than a little difficult. Although the Surface RT and Surface Pro tablets both won praise for their attention to detail and build quality, they have so far failed to set the world on fire or offer a meaningful alternative to either the iPad or Nexus 7.

Still all of that could change with the new models, both of which are expected to offer better, full HD 10.1-inch displays and some nifty battery-preserving technology. The smartcover — a detachable keyboard that also folds up to protect the device display when not in use — is set to get its own rechargeable battery so that the devices will have two power sources when not plugged in. The second-generation Surface Pro — which essentially runs the desktop version of Windows — is also set to get the latest generation of Intel Haswell processor, meaning faster, sharper graphics and response times without draining power, and a massive RAM upgrade of up to 8GB.

Externally, the new devices are expected to look almost identical to the existing models, except that they will also be available in white and their kickstands will have a minor tweak so that they can prop the screen up at two different angles.

Earlier this year, rumors and reports pointed to Microsoft offering its tablets with 7-inch as well as 10-inch screens, and although Windows 8 has been reworked to support devices with smaller displays, the company is expected to continue focusing on the high end of the market, leaving space for its manufacturing partners — everyone from Acer to Sony — to offer more compact and cheaper slates.

However, for existing Surface owners and prospective owners alike, the biggest need is for a greater selection of apps. The Surface RT model in particular can only offer its owners roughly 10 percent of the titles that iPad and Android tablet owners take for granted. And until this deficit is addressed, Microsoft’s tablets will remain a curiosity rather than viewed as a serious iPad competitor.

What’s more, with Apple widely expected to unveil its next generation iPads as early as October, Microsoft is going to have to pull out all the stops to make sure that their devices make a prolonged, positive impact on the tablet-buying public.

JM de Guzman shares how he copes with his panic disorder