A big concert will be held with special guest KZ Tandigan on April 21 at the Grove of Anaheim! 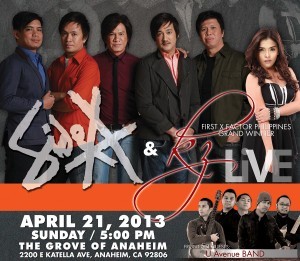 No other band can surpass the popularity of Side A, they have captured a wide audience breaking all barriers between market classes and   any music genre. Starting out at hotel lounges in 1985, they have  have been accepted in the mainstream and have all the hit records, sold out concerts  and recognition to prove it. It has been more than a decade now since they started and still hottest act for the Filipinos and Filipino American audiences.. The secret of their success? Being true to themselves, their faith, their music and their fans.   Meet the members of  Side A….

Naldy Gonzalez: Side A was formed by Naldy Gonzalez back in 1985and the only original member left  in the group. He is the band’s musical director and the keyboard player as well. Naldy is one of the songwriters and lead vocalistsof Side A responsible for hits like “Sana Naman” and “Just Wanna Make You Happy”. Joey Generoso : One of the hearthrobs of the band is lead vocalist Joey Generoso,most popularly known as Joey G. Started out singing in folkhouses, he joined several bands before finally settling down with Side A in 1989. Joey is the distinct voice that gives Side A its unique sound. Aside from being the lead vocalist, he also plays the rhythm guitar. Other members are Ned Esguerra  for Bass Guitar, Vocals, Ned Esguerra  for Bass Guitar and Vocals , Leevon Cailao for Lead Guitar, Vocals and Arniel T. Stoneslow  as Back up Vocal and Rhythm

In terms of commercial success, no other group in the Philippines was able to match Side A’s track record in the ‘90s. In 1993, the group’s third Album, went triple platinum and in the mid-‘90s Side A garnered two Awit Awards; the Philippines’ equivalent of the Grammy’s

Side A’s self-titled debut album includes their first hit single “Eva Marie” which paved the way for their illustrious recording career. Classic Side A songs such as “Windows of Our Souls” and “Di Pa Huli” can be found in the album. The upbeat song “Di Pa Huli” catapulted the band into the mainstream and thus capturing a wider audience. This also started the very popular cassette tape trend in which the Side B of the tape says “Side A too”.

Shortly after their success, Rodel Gonzalez left for Second Wind, Pido and Mar Dizon left in 1990 to form Artstart from which they would stay for a few years until 1994 when Lalimarmo united with Eva Marie Poon (sister of Richard Poon) to form Take One and Dizon later joined Parliament Syndicate when their drummer left for personal reasons.

The White Album This much awaited debut under Vicor is the second album of the band which earned them a Double and Triple Platinum Award for its outstanding sales. One of the biggest hits included is “Hold On” featuring new lead vocalist Joey Generoso and new drummer Ernie Severino completing and forming the band’s long-running line-up.

The Blue AlbumThis second album under Vicor awarded them a Double and Triple Platinum award. The album features a cover of Labuyo’s “Tuloy Pa Rin Ako” which was recorded live at the Music Hall, one of the premiere lounges in Manila. The song captures the energy and excitement of Side A during their live performances. The band line-up has not been changed until the present.The album cover sports exactly the same design as the white album with the embossed Side A logo only this time in Blue.

By Your SideThis 1995 album under Warner proved to be the most awarded album so far. Aside from its Gold Record Award, Side A bagged 2 Awit Awards namely Best Performance by a Group for “By Your Side” and Best Jazz Performance with vocals for “True Love Can Always Wait”. It was also the only album they released internationally with 2 additional singles: Forevermore and a revival of the Joey Albert hit Tell Me. This album also commemorates Side A’s 10 years in the music industry.

Side A Live! The 10th Anniversary Concert

Side A’s 10th Anniversary concert at the Araneta Coliseum proved to be a memorable occasion and to top it off this live concert recording earned them a Triple Platinum Award. A soothing collection of foreign and Original Pilipino Music (OPM) love songs with a touch of Side A. Includes the Joey Benin written Janno Gibbs original “I Believe in Dreams”. The album also features the James Taylor classic “Your Smiling Face” in which all of the band members can be heard singing solo.A  certified Gold record two weeks since released in 1997 this long overdue studio album proved to be worth the wait for Side A fans. The album features a collaboration of international songwriters including Mega Star Sharon Cuneta. Commemorates their 12th year as a band.

Ang Ating Awitin Side A’s offering for the Philippine Centennial Year released the 15th of September 1998 advance orders guarantees a gold album award for the group in its 1st week of The Platinum Collection.

A collection of all their greatest and most known hits from 1985 to 2001. A certified best-seller containing new versions of their old hit.

Kris on Bistek: I truly loved him