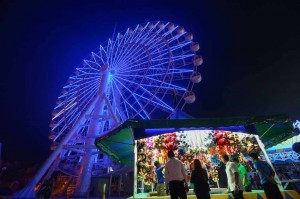 People line up to get a ride on the Pampanga Eye, the country’s tallest Ferris Wheel, at the Sky Ranch in SM City Pampanga during its ceremonial opening on Wednesday. Retail giant SM inaugurated the park on Wednesday and will be open to the public starting November 30. (MNS photo)

MANILA (Mabuhay) – Lawmakers have filed a measure calling for a congressional inquiry into the alleged failure of the government to allocate a big part of the revenue collection from Republic Act 10351 or the Sin Tax Law to finance its universal health care program.

“After its enactment two years ago, many Filipinos are still not covered by the universal health care program of the government and many cities and provinces are still without public clinics and hospitals,” Rep. Rufus B. Rodriguez (2nd district, Cagayan de Oro City) said.

In House Resolution 1591, Rodriguez asked the concerned House committee to conduct an inquiry into the matter and invite the officials of the Department of Finance (DOF), Bureau of Internal Revenue (BIR) and Department of Budget and Management (DBM) to shed light on the issue.

According to Rodriguez, the law, which was enacted in December 18, 2012, was expected to produce additional revenue amounting to P34 billion.

“The law was enacted to cover millions of Filipinos in the government universal health care program and the promise that the government will construct public clinics and hospital throughout the country,” Rodriguez said.

Rodriguez said the revenues to be collected from the sin tax law will be allocated and divided among the provinces producing burley and native tobacco and that the fund shall be exclusively utilized for programs to promote economically viable alternatives for tobacco farmers.

Rep. Maximo B. Rodriguez, Jr. (Party-list, Abante Mindanao), another author of measure, said the law mandates the DBM, the Department of Health (DOH), Department of Agriculture (DA) and the Philippine Health Insurance Corporation (Philhealth) to submit to the Oversight Committee of Congress a detailed report on the expenditure of the amount earmarked for universal health care program.

“It is incumbent upon the DBM and DOF to report to the House of Representatives and provide information on whether the goals of the law were met and where the money was utilized,” Rodriguez said. (MNS)