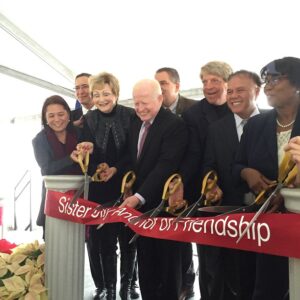 WASHINGTON, D.C.—The Philippines and the United States further strengthened their friendship and people-to-people ties through a special dedication ceremony of the Kempsville Road – Princess Anne Intersection and the Philippine Sister Anchor of Friendship on 30 November 2015 in the Kempes Landing Park in Virginia Beach.

During the dedication ceremony, Ambassador Cuisia thanked members of the Sister Cities Association of Virginia Beach and the local government officials of Virginia Beach for making the partnership possible. The envoy also talked about the significance of the anchor as a symbol of friendship between the two cities.

“It is apt that an anchor was the symbol chosen to represent this friendship. Aside from the fact that both cities have rich maritime and naval histories, the anchor is a symbol of stability, confidence, and hope—traits that are important in any partnership,” said Ambassador Cuisia.

In his remarks, the Ambassador shared projects and partnerships that have come about through the Sister Cities cooperation. 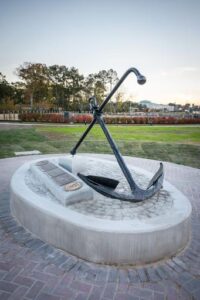 “Sister Cities International has a wide-reaching network of 145 countries and 2,121 partnerships around the world. What makes these partnerships special is the emphasis on people-to-people ties. Over the past two years, I have heard firsthand stories from students who describe their experience in the exchange program with Regional Science High School, Olongapo City National High School, and Tallwood High School as ‘once in a lifetime’ and ‘rewarding.’ The opportunity to travel abroad and meet their counterparts in another country is an eye-opening experience that helps forge lasting friendships and helps paint a positive picture of both countries. Indeed, it is at the personal level where the bilateral ties between the Philippines and the United States are renewed and reinvigorated,” said Ambassador Cuisia.

He added, “The sister cities agreement has also helped strengthen economic ties, with the establishment of a Virginia Beach Economic Development Office in Olongapo City. This opens up the potential for increased trade and economic growth for both cities. The partnership has also opened up an avenue for quicker emergency assistance during natural disasters. These programs and projects are proof that this agreement is anchored on stability, confidence, and hope for an even stronger partnership in the years to come.”

In his speech, Mayor Paulino thanked Ambassador Cuisia for endorsing Olongapo as a possible sister city for Virginia Beach.

Olongapo and Virginia Beach officials also expressed their appreciation to The Mariners’ Museum for providing the anchor. According to Mr. Gruber, The Mariners’ Museum has a vinta andbangka on display as part of his collection. He also expressed interest in collaborating with the Filipino-American community and the Embassy in showcasing the Philippines’ maritime tradition in the near future.

Sister Cities International is a nonpartisan, nonprofit network for individual sister cities, counties, and states across the US. It was established in 1956 with the goal of championing peace and prosperity by fostering bonds between people from different communities around the world.

RESULTS OF THE CONSULAR OUTREACH IN HOUSTON, TX

Cayetano to Napoles: Your money can get you a lawyer

Palace: Proposed abolition of 19 GOCCs needs to be studied first