For the past few years, Roderick Dela Cruz has used his engineering skills to help bring dam safety to his home country 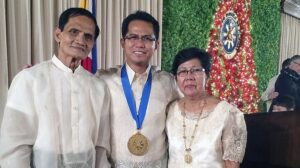 Bruno Mars may have a Grammy, but Roderick Dela Cruz is the one who went home with a Presidential Award from the Philippines.

In rarefied company, Dela Cruz, a dam safety senior engineer at Southern California Edison (SCE), was one of 33 individuals and organizations, including Broadway singer Lea Salonga, who was recently honored with the international award given to Filipinos overseas for their outstanding achievements.

Dela Cruz was nominated for using his expertise in the field of dam safety to help his native Philippines. After the devastating flooding from Tropical Storm Ondoy and Typhoon Pepeng in 2009, Dela Cruz returned to his hometown of Hagonoy to offer his help.

Since then, Dela Cruz, a nine-year SCE employee who specializes in dam safety in the utility’s Hydro Division, has made regular trips to the Philippines to help better prepare the country for future floods.

In December, Dela Cruz returned to his native land to accept the award from the president of the Philippines.

“It was a great experience,” said Dela Cruz, who attended the event with his parents. “My parents were ecstatic, so proud. They never imagined that this would happen.”

Joining the SCE engineer in the honor were 12 other Americans and awardees from France, South Korea, Australia and India. Among them were Cristeta Comerford, the first Asian and woman executive chef of the White House, serving Presidents George W. Bush and Barack Obama, and Robert Lopez, a Grammy-winning composer of the hits songs from Walt Disney’s “Frozen.”

Dela Cruz’s work in the Philippines has had a lasting impact in the country. Legislation that he helped spearhead calling for a national dam safety program is now with the House of Congress.

“Roderick’s award is an important opportunity to highlight not only the progressive work of the Dam and Public Safety group, but the company as a whole as how we can make a difference through the knowledge and experience used here at SCE,” said Michael Cruz, Roderick’s manager at the utility.

Dela Cruz, a civil engineer, credits the utility for steering him toward the dam safety arena and providing him with the experience and knowledge to be able to help his home country. Currently, there are 81 dams as part of SCE’s hydroelectric systems.

“The award is representative of what we believe in as a company,” he said. “Its values, not only to strive for excellence as a company, but to also provide support to those beyond our own customers.”

This story first appeared on the Edison Newsroom.