Solaire Resort & Casino, a $1 billion resort operated by Bloomberry Resorts Corporation in the reclaimed area by the Manila Bay, is one of the first of multi-casino Las Vegas-inspired projects in Manila.

Solaire Resort and Casino, the Philippines’ premier integrated resort, in partnership with AirAsia unveils a breakthrough branding project in the Philippines.

Solaire again raises the bar as it wraps its brightly colored logo on AirAsia’s popular Airbus A320, which is scheduled to embark on its maiden flight this July.  Solaire is the first consumer brand in the country to embark on this logo wrap campaign with a commercial airline partner, to further promote tourism in the Philippines and in greater Asia.

This dynamic collaboration between Solaire and AirAsia represents another step forward in an on-going journey towards providing modern travel experiences for its customers, with a fresh new approach to their target market.  This partnership will facilitate more passenger and cargo traffic in both regional and domestic flights, and further enhance strong trade, cultural and tourism ties within Asia.

Jasper Evangelista, Vice President, Brand & Marketing, Solaire Resort and Casino said, “This aircraft branding project is an innovative marketing tool that literally allows us to take our brand to greater heights.  We have created amazing moments for our customers since the launch of Solaire last year, and now we’re aiming to further connect with our local and foreign guests and travellers by strengthening our presence in the country’s international and domestic airports.  Sky Solaire will enable us to get immediate traction on this campaign and take it to a higher level.”

Currently, Solaire’s brand colors are donned by just one airplane, but nothing is stopping them from further rolling out this innovative wrap on additional aircrafts in the future wih broader partership arrangements.  The campaign will continue till 2016 and it is envisioned that this high-impact ad in the sky will generate more hype and publicity as things progress.

In-line with Solaire’s “Create Your Moments” campaign, which highlights Solaire as the perfect place to create unforgettable memories, this fitting  partnership with AirAsia, one of Asia’s leading and multi-awarded airlines in their category, harmoniously evokes the key thrusts of customer service, hospitality, and excitement in both industries.  This marketing initiative is also primed to open up new revenue streams for both the integrated resort and the airline carrier.

“This milestone is a key undertaking between two passionate brands with entrepreneurial and dynamic mindsets. This unprecedented branding project in the Philippines may be taken as a “leadership statement,” which attests to Solaire’s strong growth momentum in the industry. Yes we are again raising the bar; this time we’re taking it to the skies.” Says Donato Almeda, Board Director Solaire Resort and Casino. 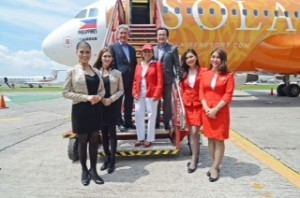 Solaire Resort & Casino, a $1 billion resort operated by Bloomberry Resorts Corporation in the reclaimed area by the Manila Bay, is one of the first of multi-casino Las Vegas-inspired projects in Manila.

AirAsia Zest Chair and Philippines AirAsia CEO Maan Hontiveros said, “AirAsia Philippines is a sociable and innovative brand. We also take pride on our collaborative nature. This new livery demonstrates our creative approach to partnerships and marketing opportunities especially with companies that support  and promote tourism. We are thrilled to carry Solaire’s brand in the sky and on the grounds at the airports here and abroad extending to as far as our destinations in Malaysia, China and Korea.”

The Solaire experience is stamped with an unparalleled brand of service style, world-renowned Philippine hospitality,  top-of-class luxurious accommodations, diverse dining options and impressive gaming facilities, which have all contributed to the way people people view resort casinos in Manila.  Many have opted to extend their stay at the resort, to have simply grown to embrace the aspirational and stress-free lifestyle offered to them at Solaire.  Solaire Resort and Casino clearly offers the utmost experience of comfort, elegance and luxury in the Philippines right now.

About Solaire Resort and Casino:

Solaire’s Phase 1 features 500 luxurious rooms, suites and bay side villas, 18,500 square meters of gaming space, a wide range of award-winning dining experience and signature restaurants, sophisticated bars and lounges, and an ample multi-level car park. The property has additional 258,721 square meter expansion project under development which is expected to open 3rd quarter of 2014. For more information and reservations, please contact a travel professional or access the website at www.solaireresort.com

AirAsia Philippines holds 49 per cent stake in AirAsia Zest after a signing an agreement with Ambassador Alfredo M. Yao, prominent businessman and owner of Zest Airways Inc., in March 2013. In the same year, Filipino Low Cost Carrier ZestAir has been rebranded as AirAsia Zest to reflect its partnership with AirAsia, the leading and largest low-cost carrier in Asia and voted as the World’s Best Low Cost Airline in the annual World Airline Survey by Skytrax for five consecutive years from 2009 – 2013.