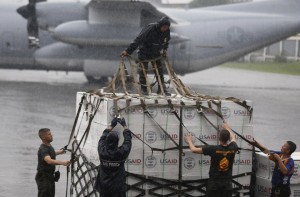 U.S. and Philippine military personnel prepare boxes containing tent material from U.S. relief organization USAID to be deployed by airlift to the victims of super typhoon Haiyan, at a Manila airport November 13, 2013. Philippine officials have been overwhelmed by Haiyan, one of the strongest typhoons on record, which tore through the central Philippines on Friday and flattened Tacloban, coastal capital of Leyte province where officials had feared 10,000 people died, many drowning in a tsunami-like wall of seawater. (MNS photo)

MANILA (Mabuhay) – Department of Social Welfare and Development (DSWD) Secretary Corazon “Dinky” Soliman on Wednesday dismissed new reports from the foreign media that food donations and other essential relief supplies are not reaching “Yolanda” victims in the Visayas Region.

During Wednesday’s briefing at the National Disaster Risk Reduction and Management Council headquarters at Camp Aguinaldo, Quezon City, she said helicopters from the Philippine Air Force (PAF) and foreign military contingents have ensured that food and other essentials have reached the most far-flung barangays in the affected regions.

“Helicopter deliveries are even done with the PAF and other foreign assets in some hard-to-reach barangays. In fact, the helicopter that crashed in La Paz, Leyte last December 6 was carrying two DSWD volunteers who were doing relief work. Both sustained various injuries but are now being given medical attention,” Soliman stressed.

The DSWD chief added that regular spot checking and monitoring of relief works in affected areas are being conducted to ensure goods are delivered directly to the affected individuals.

Soliman pointed out that the DSWD would also engage local officials to inform the agency what items are needed in their respective areas.

She made this statement after the British tabloid, “Daily Mail”, printed an article claiming that “food flown from Britain end up in shops instead to the typhoon victims.(MNS)