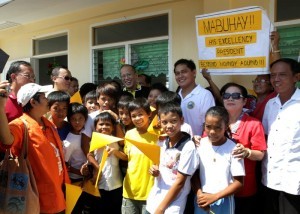 MANILA (Mabuhay) – A lawmaker is proposing the mandatory vision screening for school entrants for the early treatment of “lazy eye,” which is one of the causes of visual impairment and blindness among children worldwide.

Cojuangco said that lazy eye, or amblyopia, is often caused by a high degree of disparity in refractive power between the eyes and that the prevalence figures range from two to five percent of all children.

“The condition is treatable, with a high success rate if done before the age of 7. This declines significantly beyond that age. When the opportunity passes, amblyopic children most likely end up with permanent visual impairment. At worst, they can get blind,” she said.

Cojuangco said because it is impossible for eye doctors to check every child in the country, the national vision screening is a fast and cost-effective means of checking children’s vision.

Among the objectives of the NVSP are to identify early childhood visual problems and to provide immediate attention to visually impaired kindergarten pupils and create a referral system so that they may be checked and treated by eye specialists.

The NVSP also aims to develop a vision screening results database for all kindergarten pupils as well as to conduct continuing research on the state of visual impairment among these preschoolers.

Under the bill, the Department of Education (DepEd) is the lead implementing agency for the NVSP. In coordination with the Department of Health (DOH) and the Philippine Eye Research Institute (PERI), NVSP shall administer the vision-screening program to all public kindergarten pupils subject to the written consent from the kindergarten pupils’ parents or legal guardians.

The DepEd is also tasked to develop a system of referral and corrective measures for kindergarten pupils who are suspected or diagnosed to have eye ailments as well as create a vision-screening database wherein results of the screening per child can be found.

The bill creates a Vision Screening Continuing Research (VSCR) Fund to be sourced from any donation or bequest made to the DepEd in favor of the NVSP. The VSCR Fund shall be used to fund the PERI and for its continuing research program in connection with childhood related eye vision ailments.

For kindergarten pupils enrolled in private schools, the funding needed for the implementation of their respective school’s vision screening program shall be assumed by the private schools concerned.(MNS)